Modest but welcome improvements to Kia’s first high-powered, rear-wheel drive GT with the facelifted model priced from S$192k with COE

The facelifted version of Kia’s first rear-wheel drive GT sedan, the Stinger, is now on sale in Singapore starting at S$191,999 with COE from authorised Kia distributor Cycle & Carriage Singapore. As before, the car will be offered with a 2.0-litre turbocharged inline four making 244hp and 350Nm of torque. This engine is offered in the singular GT Line trim, and all the features described in this story pertain to this 2.0 GT Line model. The facelift encompasses mild improvements typically seen in a mid-life nip-tuck, but they are certainly welcome additions to the car. The Stinger’s basic face remains the same with redesigned headlights – there are new daytime running lights and dynamic turn indicators this time. More apparent are changes at the rear, since the car now sports a full-width tail-lightbar. 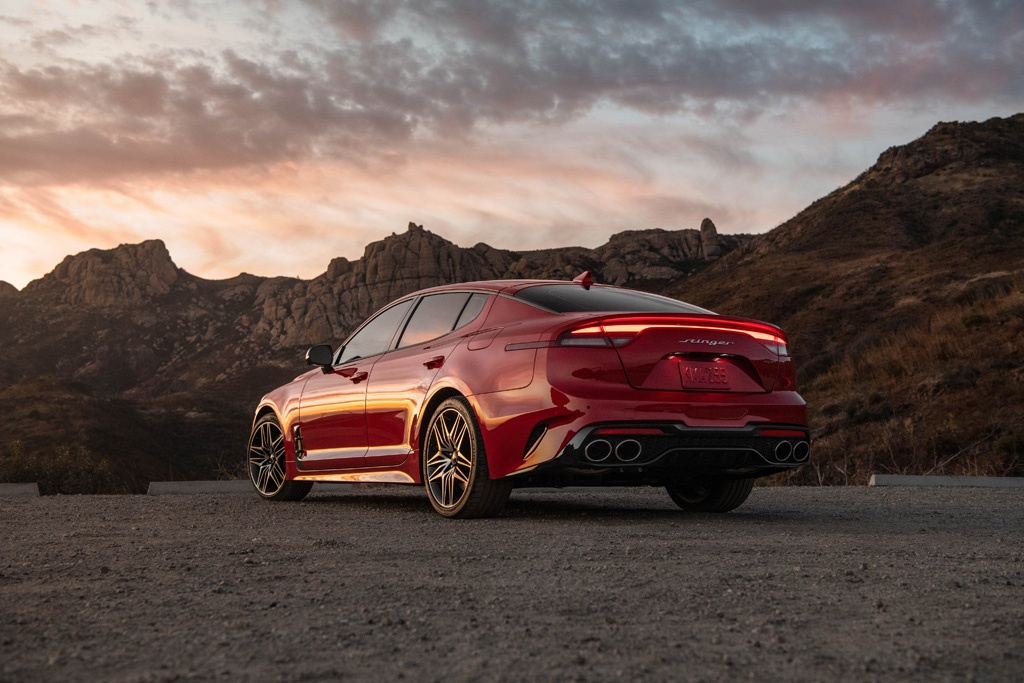 There are new wheel designs (18 and 19-inches), though sadly the very Euro GT shade of BRD-esque dark green dubbed ‘Ascot Green’ available in Europe doesn’t seem to be on the menu here. 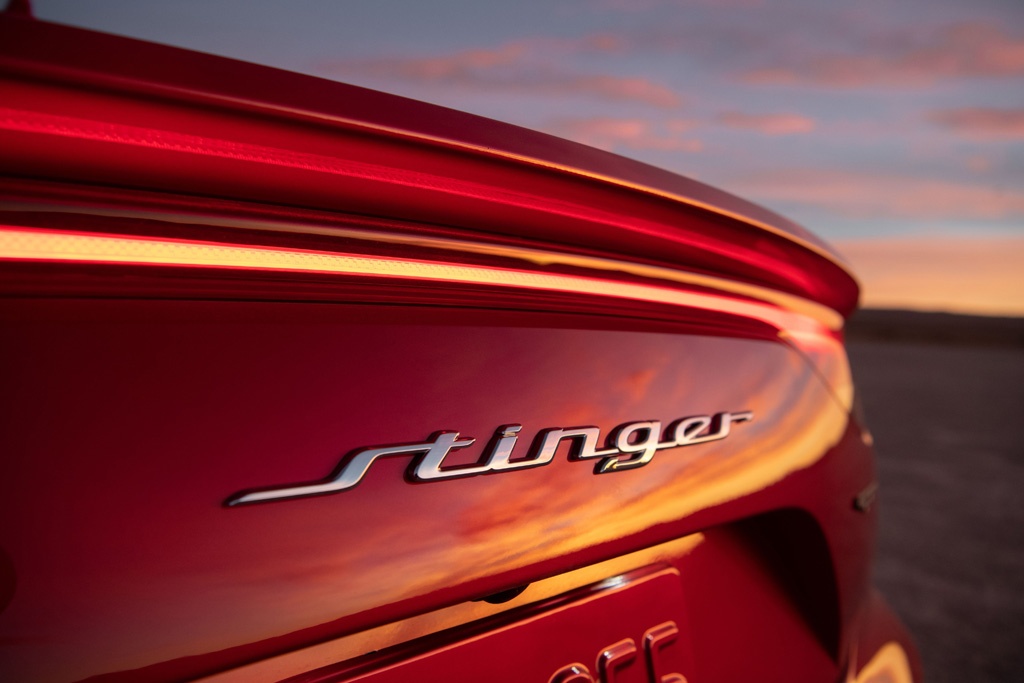 How do you spot the facelift then, besides the lightbar? Look for the square radar antenna on the front grille. US Spec facelift of the Stinger with the new badge – not in SG...yet.

Kia fans might have noticed the new Stinger lacks the new Kia badge – the global rollout of the new CI is happening in stages, and Singapore only gets the new logo and all in the second half of 2021.

Most significant are the addition of active safety systems, which as expected of any car that’s not a super-budget machine in 2021, includes the Forward Collision-Avoidance Assist (FCA) which will stop you from smacking into other road users or objects if you fail to brake. 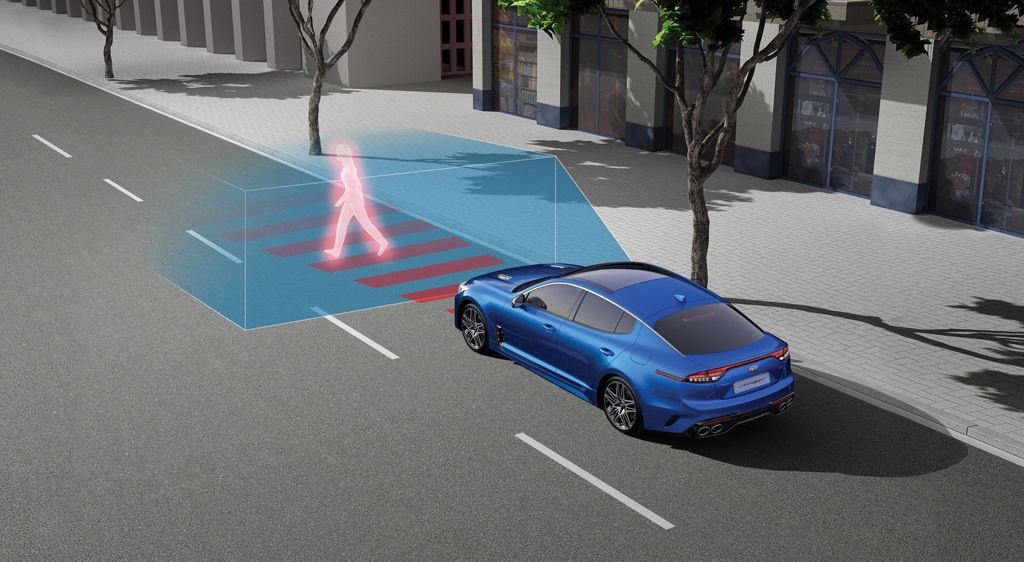 Forward Collision-Avoidance Assist (FCA) will not vaporise offending pedestrians with a blue energy beam, but possibly stop you from hitting them if you aren’t paying attention

There is adaptive cruise control, via ‘Highway Driving Assist’, which allows you to follow the car in front of you at a set distance, while Lane Keeping/Following Assist helps you to steer.


As before, the car has Blind Spot Detection and Rear Cross Traffic Alert, but the former is now improved and is called Blind Spot Detection with Collision Avoidance Assist – the difference is that it used to warn you, now it’ll also brake for you to avoid hitting lurkers in your blind spot.

Another related new feature is the Blind Spot View Monitor, which debuted in the Kia Sorento seven-seat SUV – if you signal, a camera shows a feed of your relevant blind spot in the car’s instrument panel display.

The car’s interior tech also sees a mild upgrade. The conventional dials with a 7.0-inch display are retained, while the touchscreen infotainment system also remains at 8.0-inches. 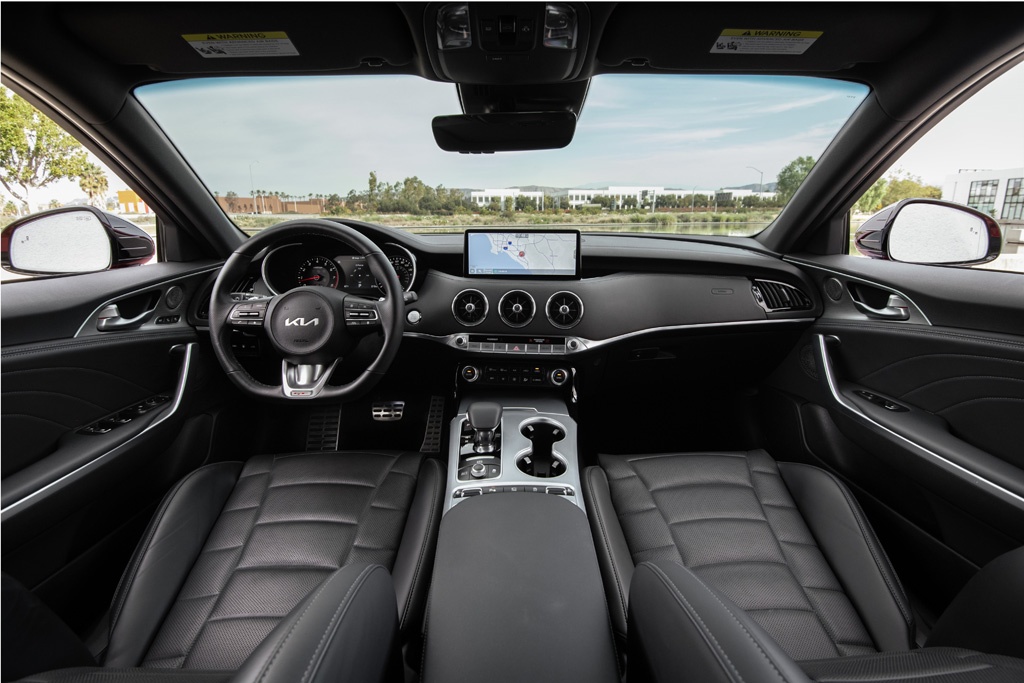 The Stinger’s updated cabin, though this is a US spec model with the larger 10.25-inch infotainment screen

Abroad, this has been increased to 10.25-inches, but we could still see that on the 3.3 V6 model, although there is now wireless Android Auto and Apple CarPlay, making this possibly the first car outside of BMWs and select Audis to have the feature.

Other improvements include new contrast stitching on the dash and doors, a new trim on the centre console (carbon or matte), and improved mood lighting. 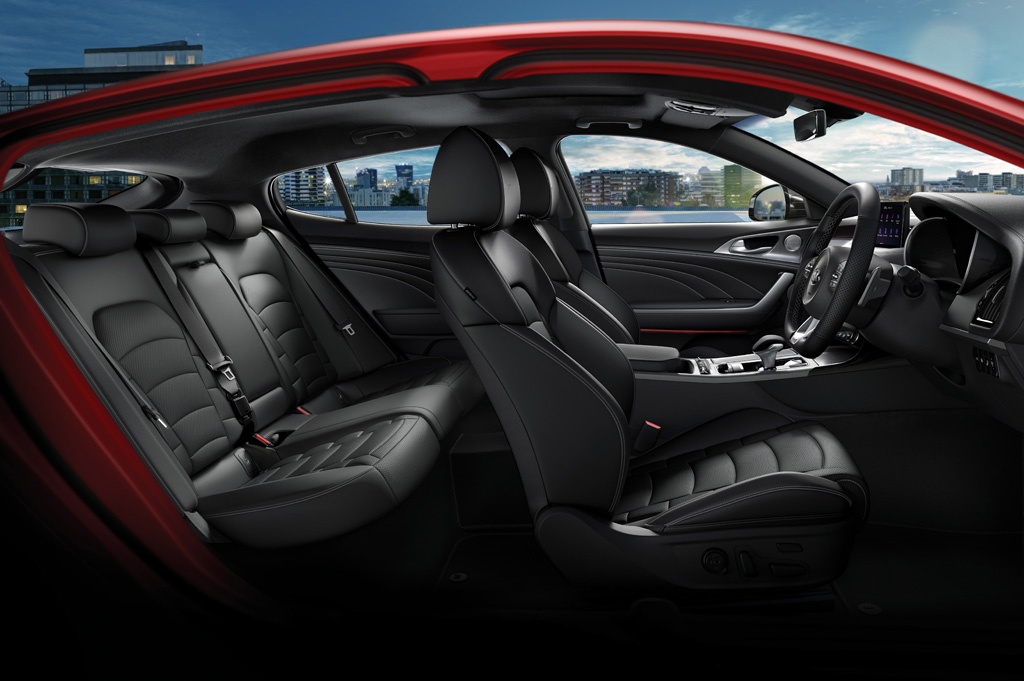 Otherwise, the car still has lots of other equipment it had before: keyless start and entry, seven airbags, auto mirrors, wireless device charging, dual zone climate control, ventilated seats and such.

If this sounds all rather tame, keep in mind that the 3.3 V6 model is where all the fun is at, if the pre-facelift spec is followed. That car received adaptive suspension, a rear differential, Brembo sport brakes, a premium sound system, and lots more.

Ever since debuting the Stinger in 2018, Kia has been on a consistent upwards trajectory and positioning its vehicles as premium, the better to distance itself from its ‘Korean = basic’ roots. The Stinger was only the first car to do that, while its latest SUVs the Seltos and Sorento continue the trend.