The updated Kia Stinger GT V6 is a sports sedan that offers performance and features that are on par with its German peers.

The Kia Stinger is the sort of car that takes you by surprise. You'd think that a Korean-made car wouldn't be capable of bagging sgCarMart's Car of the Year award, but it did back in 2018. And for very good reasons.

Usually, when a model has two different variant, the one with the smaller displacement capacity tends to be lacking, but not quite Kia's sports sedan. Despite the Stinger having two very different engines - a 2.0-litre and a 3.3-litre - both variants were competent and dynamically refined in their own rights, well-designed and both were generously specced.

How often could you say that about a car with different engines?

The 3.3-litre V6 engine is a lovely gem to behold

Thankfully, nothing much has changed. Like its predecessor, the updated Stinger remains to be nicely sorted and in this 3.3-litre twin turbocharged V6 variant, it's a cracker on the road. It whips out a whopping 361 horses and a neck-breaking 510Nm of twisting force to the rear wheels, which helps get the car from nought to 100 in just 4.9 seconds.

Safe to say, that's faster than most hot hatches. And should you find yourself a stretch of tarmac that's long enough, you might just hit the top speed of 270km/h.

These figures alone are a major result that allows the Kia Stinger to be competitive enough to be credible, let alone the standard equipment that offers incredible value. After all, the Kia faces stiff competition like the Audi S5 Sportback and the BMW 440i Gran Coupe, both of which are significantly pricier than the Korean car.

That's to be expected, of course, but it doesn't mean the Stinger is lacking. Not only is the eight-speed automatic gearbox lightning quick and smooth shifting, the rest of the fundamentals of solid driving are there. Steering feel is clear, if a bit lacking in weight, the driving position is spot on, and the car's agility is nothing short of remarkable. 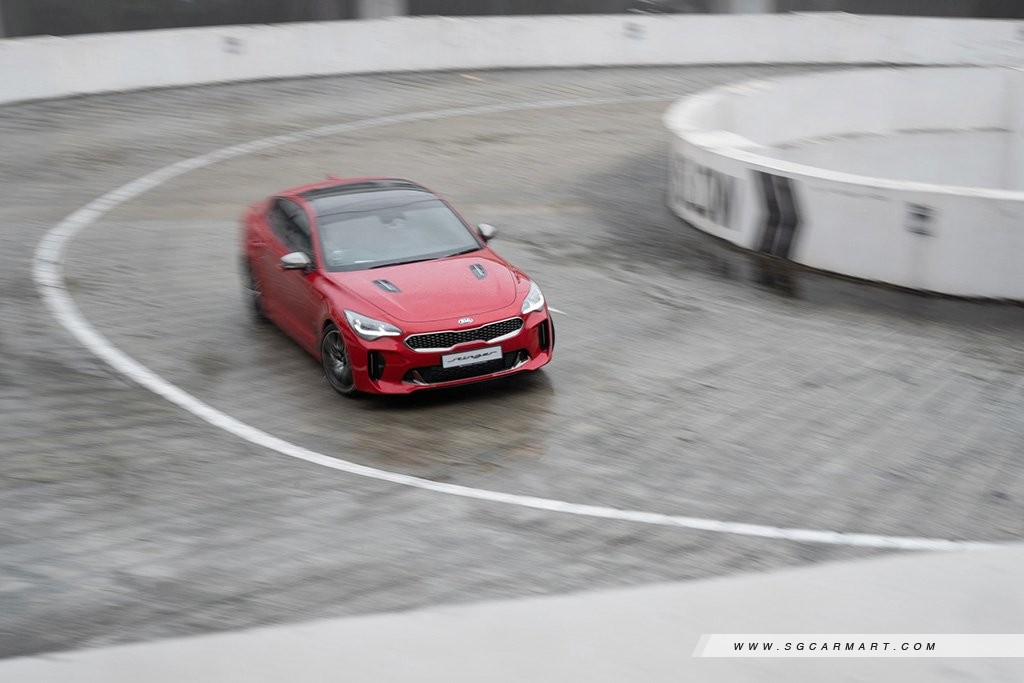 The Stinger will hold its own well even in the wet

Diving into corners, you can do the mumbo jumbo and twist and shout as the Stinger goes in planted and comes out in such a lively and confident fashion that you can be sure you won't be facing the wrong way on a two-way road. And if that were to really happen, the standard Brembo brakes will do their job to provide strong stopping power for necessary correction.

When that happens, you'll be thanking your lucky stars and the brakes not just for saving your life, but also the lovely cabin. In here, the Stinger offers a host of connectivity features such as wireless Apple CarPlay and Android Auto, as with most new cars today. The cabin is well designed and very well put together

And like these new cars, the car you see here on this page offers an interior that's well-designed, well-specced and well-thought out. Materials used as well as fit and finish are arguably something you can boast to your friends about without hiding your face under your own armpits.

Arguably, you also get a long list of standard equipment that will put a lot of other cars to shame. There are ventilated seats, electric tailgate, wireless smartphone charging and sunroof, just to name a few.

But the most obvious update here has to be the sharp and lag-free 8.0-inch infotainment system, as well as a suite of safety and assistance systems that come standard - one of which is the Blind Spot View Monitor that is also found on the Kia Sorento and the Hyundai Palisade that we found particularly useful. Also useful is the 406-litre boot space. While not the class-leading, you and I will have to admit it's not measly and will easily swallow your weekly shopping and outing bags.

In the looks department, the daytime running lights have been reworked, and so have the taillights. A new rear light signature now spans across the width of the muscular rear. Other than that, the Stinger gets such a mild cosmetic change that you'll really have read the brochure to know what's new. The rear light is now stretched across the rear

Good thing is the car remains to be a looker, at least to these eyes. The long, low-slung silhouette is still there, with proper bulges at the right places that exude a good amount of sportiness and class without coming across as tacky. It wouldn't look out of place, this Kia, when parked beside an Audi or a Bimmer.

This 3.3-litre V6 Stinger - with all its good looks, extensive standard features and excellent drivability - will set you back $238,999 (as of 10 July 2021). Yes, it's not exactly a bargain due to COE prices and the change in the VES surcharges, but the car is nevertheless one that is competent to pilot and comfortable to haul your family. 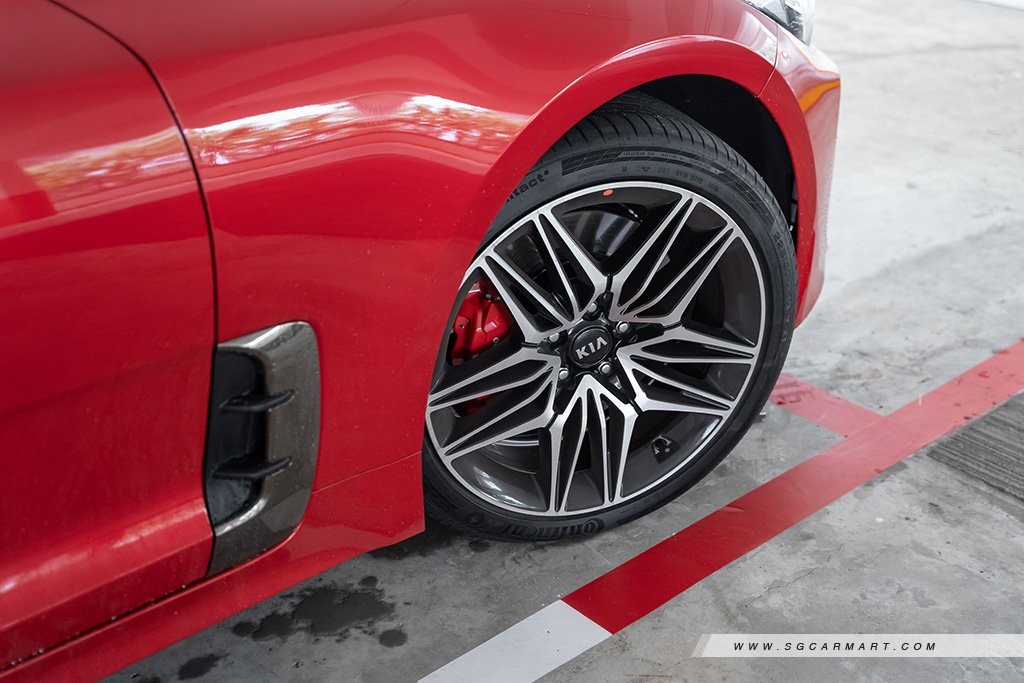 And if this isn't your cup of tea, at least you can take solace in knowing that you still have a more affordable 2.0-litre option that is equally competent in its own right.

To be fair, how often can you say that about a car with different engines?