New Kia Sorento review: The art of the big deal

There's an art to building this much car for this little money, and Kia has mastered it.

GENERALLY, a large Korean car is nicer to drive than a small German one, and if you don't believe me, here's the proof. It's called the Kia Sorento, a car unknown to luxury aficionados but favoured by people who want seven seats in a roomy cabin, rugged looks and some degree of plushness, but are lukewarm about having to pay through the nose for it.

The 2020 edition builds on the strengths of the last one, with more road presence, a monk-like engine, increased cabin room and a host of advanced features.

It's impossible for a car like this to make your juices flow, but the Sorento can pretty much do everything a Volvo XC90 can (except with slightly tauter handling), for about a hundred thousand bucks less. I don't know about you, but that's the sort of thing that makes the blood rush to my extremities.

Prices start at S$154,999 (including Certificate Of Entitlement) for the Sorento SX, which comes with a 2.2-litre turbodiesel engine. S$10,000 buys the Tech Pack, which adds a better sound system and a suite of active safety technologies. Find yet another S$10,000, and you can get the GT Tech Pack, which has running boards, bigger wheels and all-wheel drive.

Whichever one you choose, the fact that the Sorento can even be mentioned in the same paragraph as one of Volvo's best tells you that Kia has climbed a mountain of respectability. Sure, the XC90's cabin is much nicer, and it's a more refined machine on the move, but the Kia isn't far off at all.

If you're new to diesel power, the muted chunter of the Sorento's engine might rankle slightly at first, but it's quickly forgotten when you experience the surging power delivery and the smoothness of the eight-speed transmission.

Anyway, you'll forgive any perceived sin when you see the fuel bills. The Sorento's engine may be lively, but it's also a model of temperance. In three days with The Business Times, the Kia drew from its tank at 6.5 litres per 100km (our single worst journey was an urban crawl at 9.3L/100km). That's 14 per cent worse than the official fuel consumption figure, but even at that rate, the average driver here would only stop at a filling station once a month.

And because diesel is way cheaper than petrol, the Sorento makes all the more sense if you have better things to feed than a car, such as a household of ravenous teenagers.

Assuming all the chum you throw them actually goes somewhere, those growing teens should fit nicely in the Kia, too. It was roomy before but feels cavernous now, especially in the middle row. No car actually has third row seating that could be described as comfy, but the Kia's comes close. More to the point, gaining access back there is a matter of wiggling past the middle row chairs, which tip and slide forward at the simple press of a button. 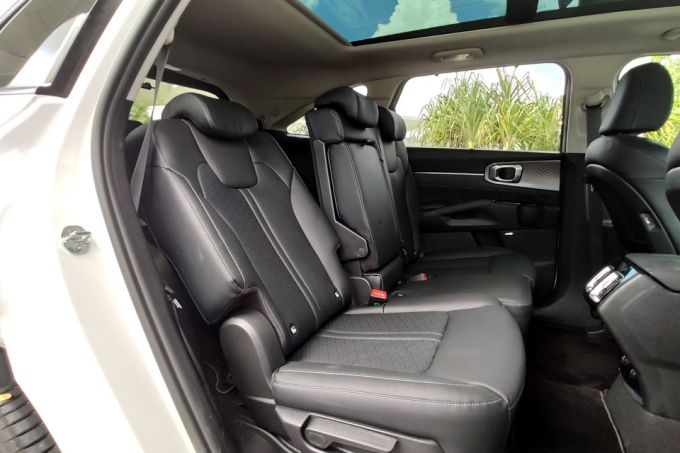 As capable as it is at being a family bus, the Sorento isn't horrible to drive, and not merely because family buses have a low bar to clear. The front tyres sometimes chirp under hard acceleration, struggling to cope with the engine's brawn, but the Sorento enters bends securely and with a modicum of poise.

The suspension is firmer than millennial parenting, but it correspondingly exerts finer control over proceedings. All in all, the Kia comports itself with an air of well-mannered and soothing grace. Which is to say, it feels like a big car to drive.

If anything injects pizzazz, it'll be the Tech Pack wizardry. The cabin itself is pleasant to look at if you like the chiseled styling of the exterior, because the chunky lines carry over into the interior, but the Sorento's digital displays add glamour. 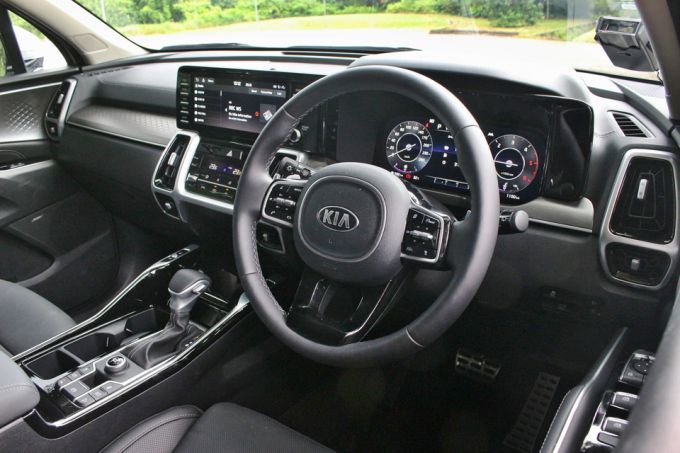 The little camera that embeds a view of the car's blind spots into the instrument cluster is a particularly nice touch that you don't see often, and the lane-keeping assistant and radar cruise control do make traffic jams less unpleasant.

Even if you find those gimmicky, the Sorento is full of worthwhile features, from the ventilated front seats to the head-up display system that warns of cars encroaching into your blind spots. Then there's the 10.25-inch touchscreen, with its Apple CarPlay and Android Auto compatibility. Those are no longer niceties, but essentials.

And it's the essentials that the Sorento really nails. It's genuinely comfortable and well-equipped, and it shows that if there's an art to offering as much car as possible at a certain price point, Kia has mastered it.

People are entitled to their snobbery, of course, but it's now a given that Kia's cars are underrated by many, and perhaps always will be. Yet, the Sorento is good enough to make you ponder the flipside, which is that maybe many luxury cars are overrated?