[This article was first published on oneshift.com.]

"While it is a rather large car, I was pleasantly surprised at how nimble the Sorento is around the bends"

SUVs have in the last few years, seen a surge in popularity. While MPV-rivaling variants were once somewhat a novelty, with semi-practical rear quarters, a new breed of people-carrying SUVs have emerged; where the element of outdoorsy fun meets family-practicality. The KIA Sorento may have begun life about a decade-and-a-half ago, as a rugged and somewhat agricultural body-on-frame offering. But fast-forward to today, Their new large SUV not only looks stunning, but it is actually very impressive. KIA’s signature ‘Tiger Nose’ returns this round as a broad-bold grille design, flanked by business-like LED headlamps. A strong character line that runs around the car visually breaks the height, and gives the Sorento a lift. The Sorento’s rear tail lamp design which is one that grows on you, hints of generation one Range Rover. While the interior is unapologetically plastic, it is well put together; and KIA has gone the distance with what looks like a play on that one singular material, and they have done a rather good job. Our test vehicle, which is the Tech Pack variant also receives LED ambient interior lighting. The diamond-shaped relief, found on the door panels and on the passenger side of the dash, hides ambient lighting elements, which remind me of the tail lamp design in the DS 7 Crossback, another brand carried by Cycle & Carriage, KIA’s local dealership. 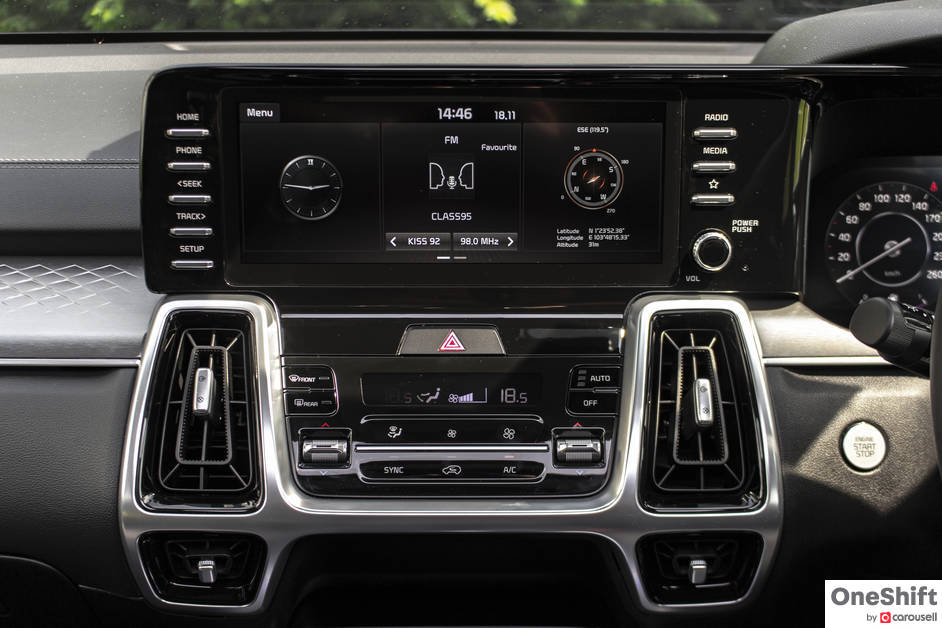 The dash now features a singular glossy binnacle, similar to the one found on the KIA Seltos compact SUV that houses the new 10.25” wide touchscreen display, and instrument cluster. Unlike the Seltos, which has just a touchscreen, the Sorento’s screen still has menu buttons flanking it, which does help with quicker infotainment navigation. Both the Tech Pack and GT models are fitted with a BOSE premium 12 speaker sound system. The infotainment system supports both Apple CarPlay and Android Auto, and to keep your mobile juiced up, all Sorento models come with a wireless mobile phone charger. KIA has also made the effort to split the air-conditioning vents to primary upper and secondary lower sections for improved airflow, and they do help especially during warmer days. One of the traits the Korean brands are known for, is adding value where value counts. Both front seats are also ventilated for added comfort, a feature that you will usually find in upper range cars of luxury brands. Behind the wheel, drivers are greeted by a new 12.3” high-resolution digital instrument cluster, which has a really nifty party piece, which I will get to later. The steering wheel has just about all the buttons and switches you will need to operate the infotainment. Little touches like the windscreen-projected heads-up display, and door panel-mounted wing mirrors are intended to help improve visibility, and driving focus.

You can also tell that there is plenty of thought put into the mechanics behind the middle and rear seat workings. While the middle row, like many such cars is expected to roll and fold forward, I like the ingenious one-touch mechanical process that KIA had incorporated into them; making access to the rear row of seats even easier. The middle seats can also be folded with a touch of a button, to make way for more cargo space. With all seats up, the Sorento offers 187 litres, which is sufficient for most supermarket runs. 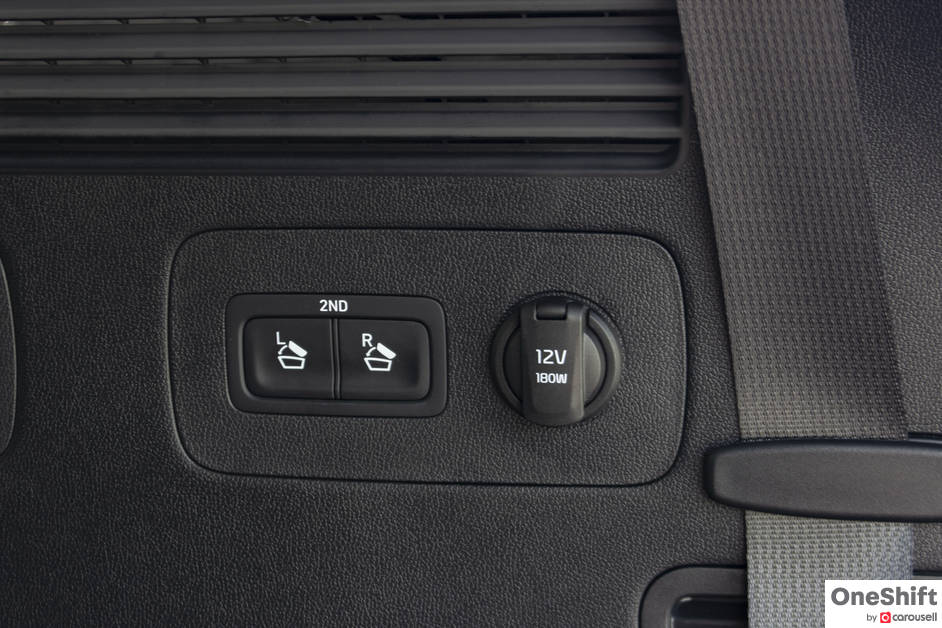 With a little adjusting, there is ample space for up to seven in the Sorento. While adult passengers at the rear will have sufficient head and legroom, as with vehicles of this nature, thigh support is often non-existent. Air-conditioning vents are also available for both middle and rear seat passengers, and so are USB ports.

While the new Sorento takes power from a 2.2 litre turbocharged diesel engine, like its predecessor, this new Smartstream unit is built with a new aluminium block, shaving almost 20kg off its total weight. A new 8-Speed dual-clutch transmission drives the front wheels, and provides quick gearchanges. With 202ps and 440Nm on-tap, the Sorento accelerates effortlessly. While not rapid, it is able to take off from the lights briskly.

But where the Sorento especially shines, is in its relaxed (not lazy) cruising. A well insulated interior translates this into a peaceful driving experience, and you will almost not hear the engine’s characteristic clatter. While KIA claims a lab-tested 17.5km/l in combined cycle, I actually nailed 18.1km/l combined, and scored 20.1km/l on highway runs.

While it is a rather large car, I was pleasantly surprised at how nimble the Sorento is around the bends. The suspension is tuned slightly on the firm side so that it can take your seven-person payload, and seemingly, it does help with keeping roll during cornering to a minimum. The lightened up front-end translates to a little more turning accuracy; and where the previous car did lumber around, the new car simply obliges.

Speaking of the previous Sorento, which suffered from a huge blindspot on the passenger side; this has been addressed in the new car in the most ingenious of ways. An all-new Blind-Spot View Monitor (BVM), available in both the Tech Pack and GT, takes advantage of the digital dashboard to display the side you are turning at… and it encourages you to use your indicator lights, since it works in tandem with them. Also included is its Smart Cruise Control (SSC), which relies on a front-view camera and radar to adapt to traffic conditions. It is even able to come to a complete stop and start again, if the situation requires it. The same camera and radar also functions as the car’s forward collision-avoidance assistance, which warns the driver and even applies the brakes in an emergency. Parking the large SUV is also a breeze, since the Sorento is equipped with a surround view monitor, displaying a stitched top-down view of your vehicle as you park. The display is impressively clear, with guiding lines to show the reversing path you are taking.

While MPVs have always been the go-to vehicles when you are looking for a vehicle that can haul the extended family, SUVs like the KIA Sorento have come a long way, and now offer MPV-rivaling packaging.

The Sorento shines, especially because it has a distance-conquering diesel engine, which has become a rarity these days. The model to pick, despite the $10k difference is this Tech Pack variant, since you will get the Blind Spot View Monitor, which will be used every time you take to the road, Smart Cruise Control, and Forward Collision -avoidance Assistance. And sure… you also get to spoil yourself with premium BOSE audio.

Competition is getting stiffer, with offerings like the Skoda Kodiaq, SEAT Tarraco, Mazda CX-8 and Peugeot 5008; offered at varying prices, but still spoiling you for choice.

We Don't
There are still some panel creaks due to the many plastic mouldings, and plastic moulding quality can still be improved on. Diesel engine gets vocal when being worked harder.

Verdict
The New KIA Sorento is a well-equipped SUV, capable of hauling the extended family around, without much compromise on interior space. Diesel fuel economy and heaps of torque are ideal, especially if you often bring the family out, or travel long distances.