SINGAPORE - I love big cars. Who doesn't? You get space. You get presence. And did I mention space?

The new Kia Sorento delivers on that front (and back) fairly well. Built on a new platform, the seven-seater sport utility vehicle (SUV) is bigger than its already sizeable predecessor.

In the metal, it looks bigger than it is. In fact, it looks almost as imposing as big German multi-seat SUVs such as the Audi Q7 and BMW X5, both of which have more generous dimensions.

Styling-wise, the Sorento has shed some of its predecessor's softer curves for an edgier, sportier silhouette. It wears a more aggressive tiger grille which literally blends with the car's slim headlights. Its lower bumper assembly hints at aerodynamism and complexity, which is emphasised by cosmetic side vents and a rear spoiler.

It is not something you would describe as beautiful - not many large SUVs are - but it exudes an aura.

Its real beauty lies in the way it moves. The fourth-generation Sorento, despite its size, is eminently driveable.

Its new 2.2-litre turbodiesel engine produces 202hp and 440Nm of torque - equivalent to the previous turbodiesel which was 48cc smaller. Paired with an eight-speed dual-clutch transmission (six-speed auto previously), it affords the big multi-seater a surprising lightfootedness.

Say what you may about diesels, they have plenty of shove, making them ideal for bigger, heftier vehicles (the Sorento weighs over 1.8 tonnes).

They are fuel efficient too. The test-car averaged 8.5 litres/100km, which is noticeably better than the Mazda CX-8 reviewed here two weeks ago. As diesel is cheaper than petrol, your running cost is going to be significantly lower.

Equally surprising is the fact that the Sorento falls within the Vehicular Emissions Scheme's neutral band, which means it is as clean as most petrols.

The other likeable thing about the car is its ride and handling. Its suspension is decidedly comfort-bias, but without the boat-like movements often found in big SUVs. 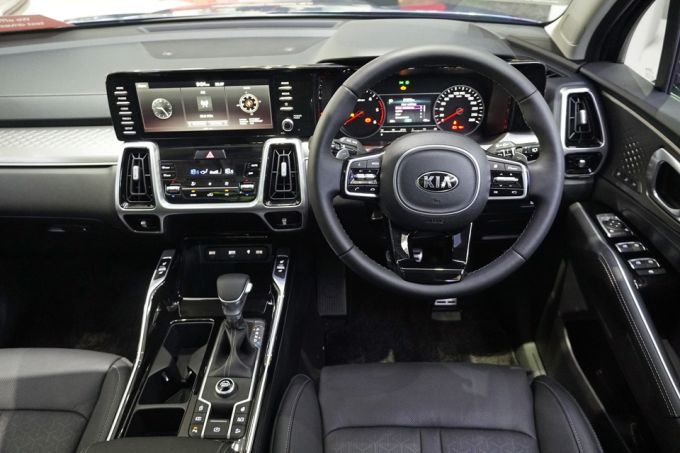 At the wheel, you do not feel the car's size. But being a front-wheel-drive (the previous turbodiesel was all-wheel-driven) with so much torque from its turbodiesel, you will sometimes hear squealing rubbers if you squeeze the throttle a little too hard at the lights.

Yes, the car is not as refined, with slightly more vibrations than you would feel in the petrol car. But the sound of distant tractors - which diesels are usually known for - is almost undetectable.

The Sorento is well-equipped. It has adaptive cruise control and lane-keeping, as well as electric parking brake with auto-hold function.

When you signal to turn, a rear side view appears on the car's 12.3-inch instrument panel (on the side corresponding to intended turn) - a nifty first. I use it to gauge the wheels' distance from the kerb as the car's reverse camera has not been installed.

The powered tailgate opens to reveal a usable boot - even with the third row of seats up.

You will also find ventilated front seats, wireless phone charging and a delectable Bose 12-speaker sound system. The interior ambient lighting is subtle and the head-up display is clear.

In short, the car is rather peachy to drive. As for the rest of the family, I bet they love big cars too.