Kia’s huge Carnival MPV is heading to Singapore in 2021

7- or 8-seats, 2.2-litre turbodiesel, lots of space and a Mercedes-like cockpit for Kia’s king-sized MPV

Anyone remember multi-purpose vehicles (MPVs) – you know, the boring, boxy things that already provide much more room for people and cargo compared to a sport utility vehicle (SUV)?

It seems Kia hasn’t, since it has plans to bring the newest, fourth-generation of its extra-large MPV, the Carnival, to Singapore in 2021. That’s notable not just because the new Carnival looks rather interesting, but also because it’s been absent from Singapore for more than a decade. When was it last here? That’s discussed at the end. The newest fourth-gen car, teased by Kia in June this year and revealed by Kia globally last week, will be sold here with a 2.2-litre turbodiesel engine, not the 3.5-litre V6 gasoline versions. The Carnival is known as the Sedona in the USA and the UK.

The car is capital B ‘Big’ – at more than 5,110mm long and 1,995mm wide, it’s longer and wider than the current crop of super-big Japanese MPVs, which include the Toyota Alphard and Nissan Elgrand, all of which measure just under five-metres long. The new Sorento shares platform with the Carnival

With the Carnival, Kia’s looking to flex the design muscle it’s gained, the same that’s made the Cerato sedan such a sales success, and already seen in full swing on the next Sorento SUV – both cars run on Kia’s new mid-sized platform. Like the French, Kia seems to have pulled off the trick of making a minivan look techno-cool without being trite or overdone. The front end is where all the eye action is – look at the monolithic front grille with the LED headlamps set into it, they’re not discrete units, and underscored by interesting daytime running light signatures below. Anyone else seeing shades of a mutant-hunting robot here? A silver C-pillar breaks up the boxiness of the car, with the silvered section running all the way behind and blending into the full-width taillight-bar – something of a current car fashion trend. Within the lightbar is the same light ‘squiggle’ seen on the Cerato sedan.

While the car has a larger footprint than its Japanese rivals, it’s also not as tall, which results in looking less boxy and more wagon-like, the Honda Odyssey (an MPV a size down) takes a similar tack.

Regarding under the bonnet business, Kia Singapore says it will sell the 202hp, 2.2-litre inline four-cylinder turbodiesel variant here, rather than the 3.5-litre V6 in 294hp and 272hp editions. 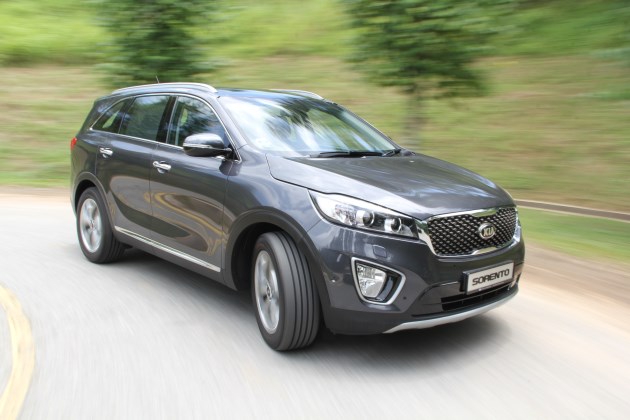 It says its customers who have own its current-gen diesel cars – such as the Sorento SUV and Carens MPV – have faith in the technology. It’s also worth noting that the road tax for a 3.5-litre gasoline car would be about S$3,100 annually, compared to S$2,000 for a 2.2-litre diesel.

The turbodiesel is a new ‘Smartstream’ engine with an aluminium block meaning it’s 20kg lighter, and important for hauling plenty of bodies around, it offers up to 440Nm of torque. In contrast to the third-gen car’s six-speed unit, the transmission is an eight-speed automatic. Kia hasn’t revealed any performance figures as yet. 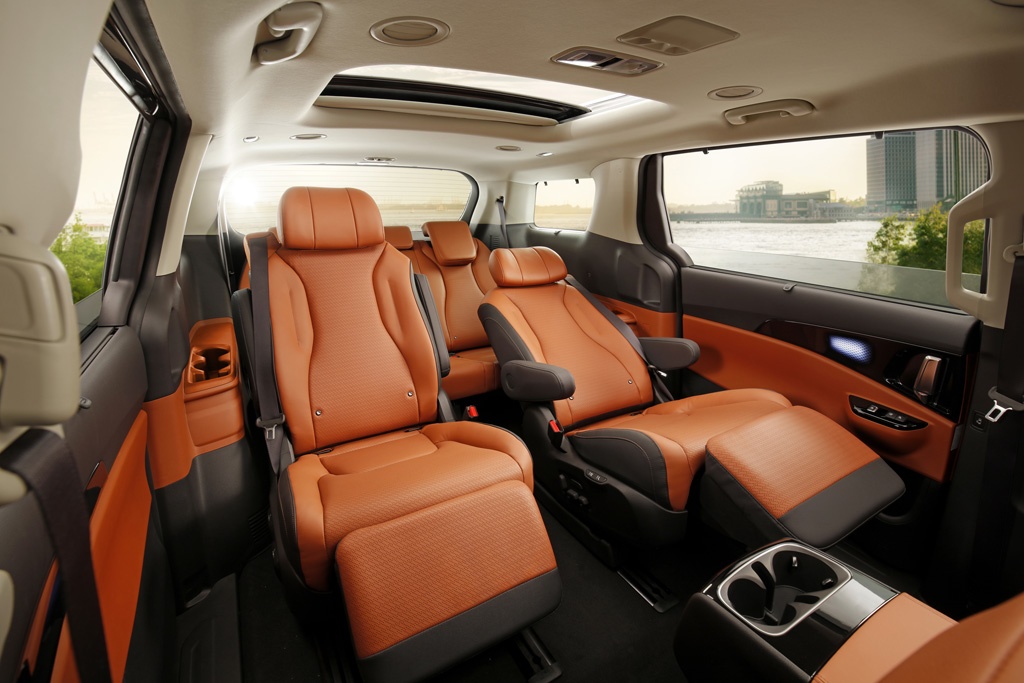 What’s of less doubt is how roomy the car will be. Like the third-gen model, the car is available overseas as a ridiculous 11-seat ‘soccer mom’ variant (2 + 3 + 3 + 3). Singapore’s models won’t be able to carry a full soccer team, but will be seven or eight-seaters (whether this is either or both, is to be confirmed). It looks as if the Premium seat occupants can swivel around to face their guilt, I mean, rear passengers but Kia doesn’t mention this in the press release

Seven-seat versions have more spacious ‘Premium Relaxation Seats’ in the second row. Kia quotes 627-litres of boot space with the third-row in place, and with all the seats folded the car would probably bust its gross weight limit before being filled – it can take 2,902-litres of cargo.

It’s still too early to confirm equipment and feature specs for Singapore, but Kia mentions big improvements in refinement, technology, and active safety. 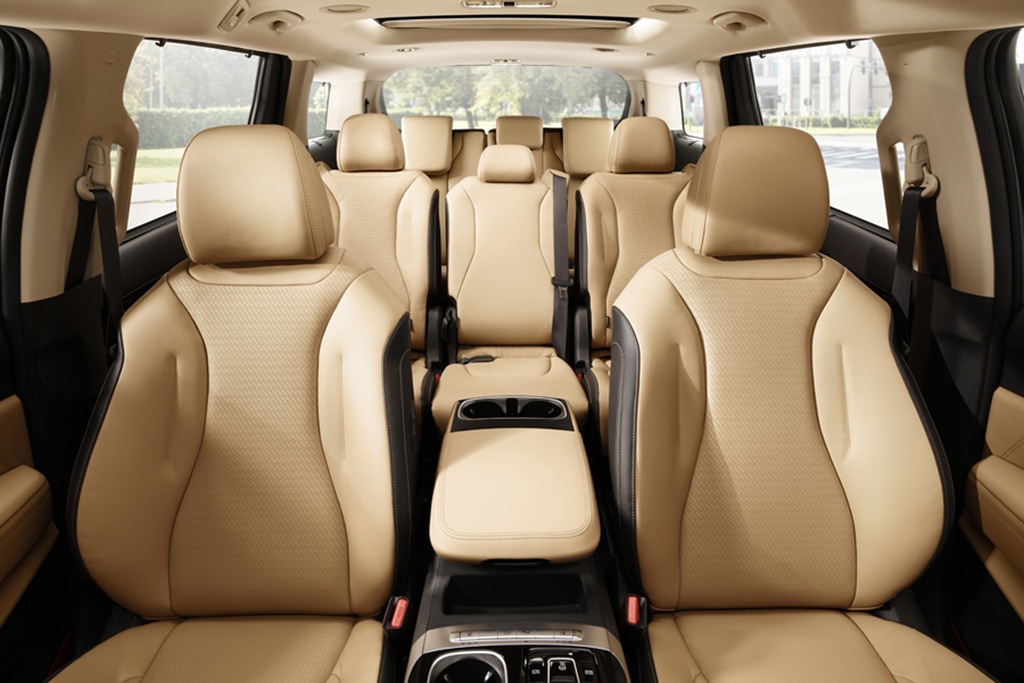 The suspension improvements include completely redesigned suspension, new ‘hydro bushings’ with liquid inside to improve ride quality, more sound insulation around the wheel arches and around the firewall, and a full underbody cover.

That looks like a Mercedes interior, or at least the massive screens do

The Carnival’s interior tech is a big show – like a current-era, ‘big’ Mercedes  it has dual 12.3-inch screens, both presented under a single piece of glass for a ‘widescreen’ effect, while the infotainment system has the now standard Android Auto and Apple CarPlay connectivity, it can also connect to two Bluetooth devices at once. 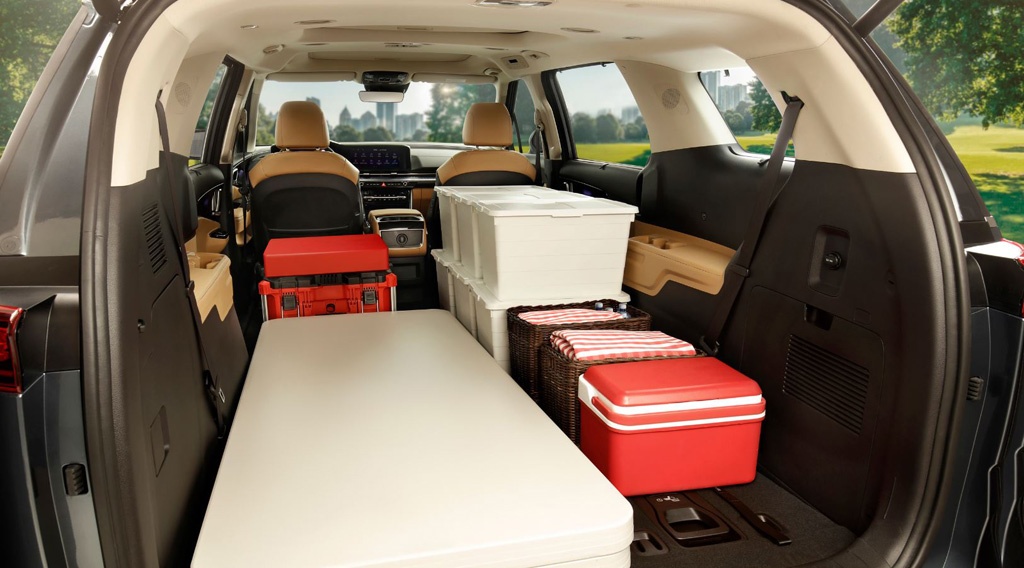 But in a big contrast to the first-gen Carnival, and evidence of how far Kia has come in that time, the new Carnival looks like it won’t be cheap: Kia describes it as a ‘GUV’ or ‘grand utility vehicle’, and as its ‘flagship family-friendly vehicle’. Given how higher prices haven’t scared buyers from the Sorento large SUV, or even Kia’s first rear-wheel drive performance GT, the Stinger, the Carnival could certainly liven up the huge-MPV segment here.

How much will it cost?

The first-gen Carnival MPV was last sold in Singapore in 2008 – 12 years or two car life-cycles ago. Since there is no price comparison to the previous model, it’s difficult to say.