[This article was first published on www.iol.co.za. Vehicle specifications may vary by market.]

CAPE TOWN - What the public wants, the public gets and their appetite for SUVs isn’t about to wane anytime soon so naturally manufacturers are more than willing to oblige and in this case it’s Kia coming to market with its new Sonet. It’s the carmaker’s entry point into its SUV range within a very active B-segment that includes Ford’s now somewhat long in the tooth EcoSport, Honda’s MPV-like WR-V and the badge-engineered Toyota Urban Cruiser/Suzuki Vitara Brezza, to name but a few. It’s probably the most attractive within the segment with a shapely bonnet flowing into the headlights, a ‘tiger-nose grille’, a front skid plate, 16-inch alloys (15 inch on the entry level LX derivatives), roof rails and a wrap-around rear windscreen rounding it all off. It’s more understated than loud and in this market that’s not a bad thing. The interior feels solid and well made with its leather-cloth seats, leather wrapped multifunctional steering wheel and hard wearing surfaces mostly in piano black which personally I think could have been offset a little with some silver inlays to break it up slightly.

The 20cm touchscreen infotainment includes reverse camera and features voice control and wireless Apple CarPlay and Android Auto, something that has almost become as essential as ABS and airbags. In front of you is a digital instrument cluster that’s easy to read once you’ve figured out which “needle” does what. Taller passengers are well catered for in the back and behind them there’s 392-litres of luggage space for those weekends away.

Built in India, the Sonet is powered by a new engine in our market, the 1.5-litre MPI powerplant that’s normally aspirated and is good for 85kW and 144Nm. It sends power to the front wheels via either a six-speed manual or CVT transmission. 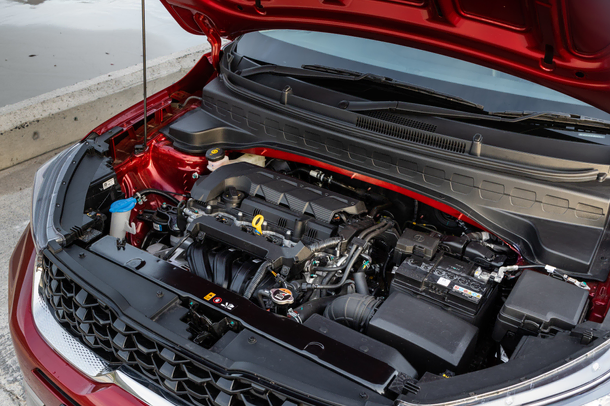 A 1.0-litre GT Line turbo is set to arrive on our shores towards the end of the year.

Our launch route included some spectacular scenic and twisty roads including gravel driving from Cape Town to Hermanus. We were in the manual variant and found the gearbox to be slick and easy to change with a light clutch.

The engine didn’t mind being given a heavy right foot, responding well to our inputs while the suspension is well balanced and made easy work on the dirt roads washed away by recent rains. It weighs in at just over a ton so it gets along in a hurry and passing slower traffic, gearing down isn’t an issue at all while steering is light and easy with good feedback for a vehicle in this category. Knowing that the Sonet is fitted with electronic stability control and electronic brake force distribution certainly gives one an extra feeling of security as well.

Sound dampening is outstanding with hardly any wind noise and it showed up well on the dirt roads with the door seals doing a good job of keeping the interior spotless.

We drove without paying too much attention to consumption but after a day’s driving showed just under an impressive 6l/100km.

The return drive on the second day was with the CVT fitted Sonet EX. It’s certainly a far cry from the first versions fitted in the industry and “gear-changes” are very smooth and silent under normal driving conditions. Driving up mountain passes though there’s a whine as you push the accelerator with a slow response to pick up speed. It’s here that the manual makes more sense but to be honest I doubt very much that it will be a deal-breaker to the average consumer and the Sonet’s target market.

Sitting in the traffic loaded with children and their school paraphernalia, road trips on holiday and occasionally driving to the office, in our “new normal” circumstances is likely to fill the bulk of the Sonet’s time and in that regard it really excels.

Kia has a winner with its introduction to the SUV range. It’s well specced, solidly put together, has an impressive list of safety technology and is well priced to be more than just a disruption in the segment. It comes with an unlimited-kilometre/five-year warranty (inclusive of Roadside Assistance), as well as a pre-paid four-year/60 000 km service plan.