[This article was first published on motorist.sg]

The Kia Cerato has been refreshed for the 2021 model year with some new design elements, safety features, and an all-new logo.

This new Cerato is a facelifted version of the original 2018 car and has received pretty extensive updates both inside and out.

First of which is the all-new Kia logo. Rebranding seems very in trend these days with new sub-brands and logos for everything from Cupra to Polestar popping up all over.

Kia joined the party earlier this year with their new redesigned logo and the Cerato is the first car to be sold with it outside of Korea. To preface the rest of this review, it must be stated that the trim level to go for is hands down the GT Line spec, which our test car was and what this review will be based off of.

The GT Line spec includes all the cosmetic and practical features you’d want, and frankly need, on this car. 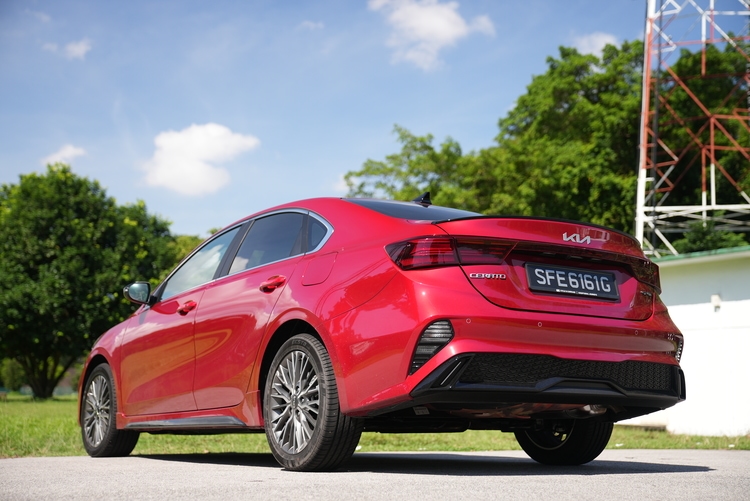 On the exterior, this new Cerato gets a new tiger nose front grille, new sideskirts, 17” alloy rims, and LED head and tail lights. The car still retains that distinctive Cerato look and style while receiving a new lick of paint and a subtle makeover. Inside the car though, is where the bulk of the changes have been made. The Cerato receives a totally made up interior that brings it squarely into the modern world.

There’s the new 10.25” touchscreen infotainment system with Apple CarPlay and Android Auto, a multifunction steering wheel, wireless charging, a digital information readout in the gauge cluster, and electric memory seats for the driver.

There’s also of course, the best feature that can be placed in a car, heated and ventilated seats. The updates to the interior have made the car feel much more upscale than the previous Cerato, with a decent amount of leather across the touch surfaces and other additions such as the sunroof and leather steering wheel and shift lever.

There’s more than ample room in the back seats too when the need arises to ferry passengers. This car also gets bumped into the 21st century with the addition of a whole raft of safety and driver assistance features in the shape of Kia’s Advanced Driver Assistance System (ADAS).

These features are a mainstay on Kia’s cars these days and we’ve covered these features in depth before in our Kia Sorento review which you can read here.

As usual, Kia has implemented these features brilliantly into the car and they make driving much easier and less stressful. What hasn't been changed on this car though, are the actual moving bits, and that’s the biggest drawback of the new Cerato.

The Cerato makes 126hp and 155Nm of torque from a 1.6l naturally aspirated four-pot mated to a 6-speed automatic gearbox.

Don’t get us wrong, there’s nothing explicitly wrong with the powerplant or drivetrain but in the day and age of small turbocharged engines and snappy shifts, the heart of this Cerato feels almost ancient.

Power delivery can be rather asthmatic and the gearbox is slow and confused compared to almost any other car you can buy nowadays, including Kia’s own cars.

Once you eventually get up to speed though, there’s not much to complain about with a comfortable and reasonably quiet ride. Pop on the adaptive cruise control and you don't even have to think about applying any throttle yourself.

If you want to see this car in action, you can check out our video on it here!

For those who didn't watch our video, the conclusion there was that the Cerato feels like an older video game that’s been remastered and updated with downloadable content (DLC).

The new features and mechanics make it a fresher and more enticing proposition but if you didn't like the game i.e. the car to begin with, then these new ‘DLC’ updates aren’t going to be enough to sway you.

But if you are a new owner who isn’t too fussy or perhaps a PHV driver looking for a new whip, this new Cerato might be the car for you.