SINGAPORE – What are the must-have features for a mainstream car in Singapore, 2021?

The new Kia Cerato has two out of three, plus something major to help it stand out of the crowd.

A popular mainstream sedan competing with the Toyota Corolla Altis, Honda Civic, and Mazda 3, and a Singapore best-seller in years past, the Cerato is ubiquitous here.

This is the fourth-gen car that debuted here in 2018, and now it’s had a mid-life facelift. To get yourself oriented, read our news story with all the info on pricing, specifications, equipment and variants: Updated Kia Cerato introduces new Kia logo to Singapore

As facelifts go, it’s more radical than most and it’s exactly what the Cerato needs to put the dukes up against its arch rival, the Hyundai Avante, which has gone deep into the four-door coupe look. At the same time, the car also debuts Kia’s new badge which was announced in January, and which Kia says marks a new era for itself – and its customers. But does looking sharp go more than skin deep, or is it just a wax job*?

Derryn and Ju-Len walk you through what’s new about the 2021 Kia Cerato – and explain the badge!

*After four generations we finally looked it up and the closest real meaning the word ‘cerato’ has is in Italian, where it means ‘waxed’. Hell, we’re just as confused as you – a ‘corolla’ is part of a flower, and ‘civic’ doesn’t make sense as a singular or proper noun. Car design has to be the most polarising and subjective bit of reviewing cars, but we’re willing to guess only a set-in-stone curmudgeon would think this isn’t an improvement over the pre-facelift model. Firstly, the new badge is a definite improvement. The old Kia badge with its straightforward black oval had a strong link to the brand’s ‘cars as white goods’ phase. The new one fits the age far better, with a brushed metal finish and a techy, milled look. Complementing the new badge is the facelift’s design. It’s very aggressive, as mid-life refreshes go, with the Cerato morphing so that it resembles more of the new Karim Habib era Digital Tiger Face – as personified in the upcoming Kia EV6 high-performance EV – rather than Peter Schreyer’s now classic iteration Tiger Nose Grille. 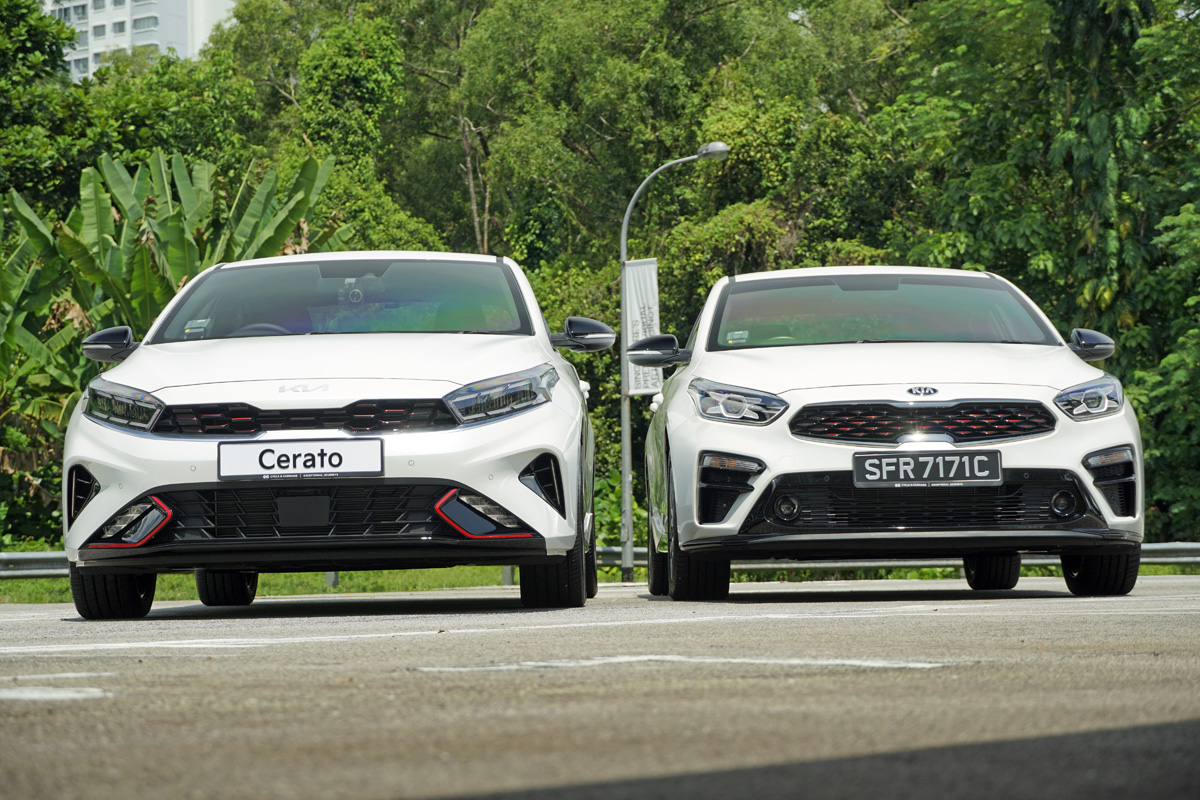 The taillights have a more segmented look, but the Cerato was also early on the full-width tail-light sections trend

The grille is far less grille-like, a trend we’ve seen on the Honda Jazz too, and part of the shift towards the ‘electric look’. It’s less tall, more broad, and no longer has a chrome outliner, while the new headlights with their six DRL segments now flow seamlessly into the grille.

Together with the large, lower intake section, angled foglights, and triangular aero features, the Cerato looks very modern, and quite athletic. This car is the top-spec GT Line model, so it has red highlights on the grille and front end, unique 17-inch wheels, a bodykit, and bootlid spoiler. But the difference in looks between the mid-tier EX and even entry-level L models and the GT Line aren’t huge, if you don’t look at the sides. The basic layout of the cabin remains the same as before, it’s still clad in all-black (the GT Line has a black headliner) for an understated, if dark, look. But it still feels well made, even in 2021, with no major hard-touch plastic sections, smooth switchgear, and no major rough edges. A driver can’t fail to notice the new badge, inset into the steering wheel. Like the exterior application, it’s interesting how much of a difference it makes to the overall presentation.

The next most prominent change is the infotainment touchscreen: It’s gone from 8.0-inches to 10.25-inches. Kia doesn’t give a specific pixel count, but it’s obviously sharper than before, clearer, and easier to use. Wired Apple CarPlay and Android Auto work better than before too, there’s less lag when navigating through maps, for instance.

As before there’s a wireless smartphone charger, which occupies a handy bay just above the storage tray, forward of the gearshifter.

A top-spec Kia variant means you get everything but the kitchen sink. It was true with the pre-facelift model, but it’s even more true with the new car.

All the niceties you should expect from a modern mainstream car are present, and a little more. Pretty much everything can be set to ‘auto’ so there’s very little manual button pressing to be done – the lights, wipers, and rearview mirrors are all auto-enabled – while a new feature is the evolution from manual handbrake to an automatic, electric one. Over the EX trim, the GT Line specific touches are the GT Line badges, a D-shaped steering wheel covered in leather with paddle shifters, GT Line sport seats with ventilation are particularly helpful in staving off weather that’s hot enough to melt tallow. The GT Line also has dual-zone air-conditioning, a sunroof, electrically-adjustable driver’s seat. As typical of GT Line positioning, it makes the S$6k difference from the EX a sensible leap to make, rather than an extravagant one. If there’s one feature lacking, it’s a digital instrument panel – the Cerato still has a dual-binnacle clock layout with an inset 4.2-inch LCD display. It works fine, as it has since forever, but a tiny bit more drama would have raised the tone in the cabin considerably.

Where does the Cerato pull ahead? Given the technology and almost totally new front end design, it’s a small disappointment that the car still packs the same 1.6-litre, non-turbo, non-hybrid inline four as before. Compare the Stonic small SUV, which now packs mild hybrid tech, when on paper it should be a less advanced model. With 128hp, it racks up respectable, if totally predictable, performance.  Our test car was all box-fresh with less than 20km on the clock, so the 1.6-litre sounded a little thrummy at low revs, but this eased up as we racked up the miles. We also tested the previous Cerato GT Line with more than 5,000km on the odo, and it felt significantly smoother, so we expect the new Cerato to behave identically.

Otherwise, it delivers the familiar Cerato experience: The drivetrain won’t set your world on fire, but it’s smooth and predictable, if a little lacking oomph in this age of hybrid-assisted torque. In terms of ride and handling, it’s surprisingly sporty which means little roll in corners and a responsive nose. The downside of that is busy ride quality, with complex sections of bumps and multiple corners unsettling the rear a little. For those who want a comfy ride, we recommend the EX model, which has 16-inch wheels.

But speaking of comfy, the Cerato is also one of the more refined cars at this price range. There’s a little tyre road, but otherwise the cabin is pleasantly quiet even at highway speed, with comfort pluses like the air-con seats and adaptive cruise control improving the experience further. Over 200km we clocked 7.2L/100km on the Normal drive mode (there’s also Eco and Sport), which is well within expectations for a 1.6-litre sedan like this. In the VES lottery, it scores a B, which is the very least a mainstream car should shoot for in this age.

How does the Cerato stack up:? Sedans may have been outsold by SUVs in the first half of 2021, but the mainstream sedan segment is still one of the hardest fought in Singapore.

The Cerato’s longtime rival is the Hyundai Avante, which it closely matches for price at every trim level, though the Kia is now S$1k less expensive at S$103,999 with COE. The Avante has evolved into a more coupe-like car, so its interior is more intimate, and the rear headroom a little less, though it does have a digital instrument display. With the Cerato upping its in-car-and- safety tech game, the two are neck and neck now.

On paper we also have the Japanese sedans, all of which are very capable and keenly priced. To get a better idea of how they stand, check out our Best Mainstream Sedans guide. The new Cerato is a great-looking car that drives well and solidly ticks all the mainstream sedan boxes. It’s also added numerous new features to its already mile-long list of pluses, though conventional power stops it from gaining an obvious advantage over the rest of the segment.

The 1.6-litre petrol-only drivetrain is a workhorse, but one that’s showing its age. Our bet is, this is the last Cerato to have petrol-only power here, or bust.

Singaporeans like their mainstream cars ‘fierce’ in appearance, and not so fierce on the wallet. That’s exactly what the Cerato does, though buyers should value its technology and safety boosts the most.