Lots and lots of technology, new features in the MPV segment, and bang-for-your-buck mark the return of Kia’s really big Carnival to Singapore

SUVs are all the rage these days, while MPVs lost out as CarBuyer’s analysis shows, but Kia’s new version of it’s extra-large multi-purpose vehicle (MPV), the Carnival, will draw plenty of attention.

That’s because it’s positioned well – it’s as large as Really Big MPVs like the Toyota Alphard, but less expensive, and it brings some novel features to the MPV realm. 0-100km/h is done in 10.7 seconds, which isn’t fast, but the turbodiesel’s 440Nm of torque should offer more than enough grunt to pull eight people along. It’s quite frugal too, at 6.9L/100km, especially in comparison to Japanese MPVs with non-turbo 2.4-litre gasoline engines,  though the Kia still  rates a C1 VES band for a S$15k penalty. If you’re thinking that’s a lot of money to pay for a Korean car, keep in mind the Carnival isn’t the same car it used to be. Not only has it graduated a class higher, it’s also packing all of the technology we’ve come to expect from bigger Kias, such as the Stinger four-door GT, and the Sorento seven-seat SUV. In terms of fashion, either you’re dead set on a seven-seat SUV (in which case, good luck) or you are considering an MPV for its kindness to all passengers. The Carnival isn’t as boxy as its predecessor and looks much better, the better to contrast Kia’s massive progress over the decade-plus. If you don’t remember what it looked like, this is the fourth-gen model, and the Carnival was last seen here as a first-gen model in 2008, while the second and third-gen models weren’t sold in Singapore. This is the second-gen 2008 Kia Carnival, which reminds us how far Kia has come

While it can’t hide its van-ness, the raked windscreen and imposing front end – reminiscent of the Sorento seven-seat SUV – as well as the taillight-bar make it a very contemporary-looking vehicle. As we just saw with the smaller and slightly less-expensive Honda Odyssey, the ‘SUV-ifying’ of MPVs might swing some buyers back to vandom.

Room to swing a bat

We also expect the Carnival to offer massive amounts of room inside, since it’s become huge, while the powered-sliding doors and a powered tailgate are a given for this class. 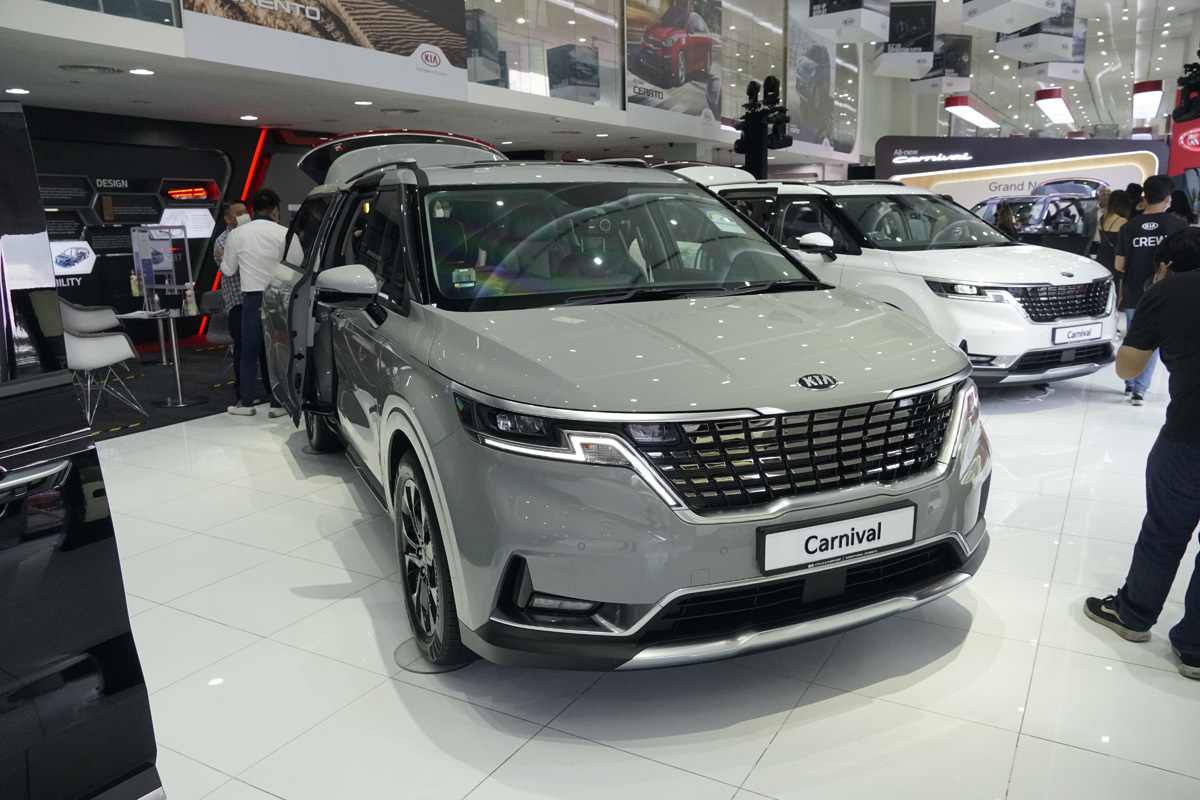 The new Carnival measures 5,155mm long, is 1,995mm wide, and 1,775mm tall, with a 3,090mm wheelbase – which means it’s one of the biggest MPVs here in Singapore. It’s moved up to become a true alternative to jumbo-Japanese MPVs like the Nissan Elgrand (from S$182k with COE, March bidding) and Toyota Alphard/Vellfire (from S$245k with COE, current price in April).

To compare, the Toyota Alphard is 4,915mm long, 1,850mm wide, and 1,895mm tall, with a 3,000mm wheelbase, so the Carnival in comparison, should offer more shoulder and legroom, but less headroom. That’s an important point, though: At under 1.8-metres tall, the Carnival will have no problem with the vast majority of carparks here, if you don’t mind less headspace.

Leather upholstery is standard, though only a black and grey option is available for Singapore. Inside, the Carnival is full-on 2021, with a large 12.3-inch touchscreen taking centrestage, and it’s able to sync up with Android Auto and Apple CarPlay, though not wirelessly like the Stinger. 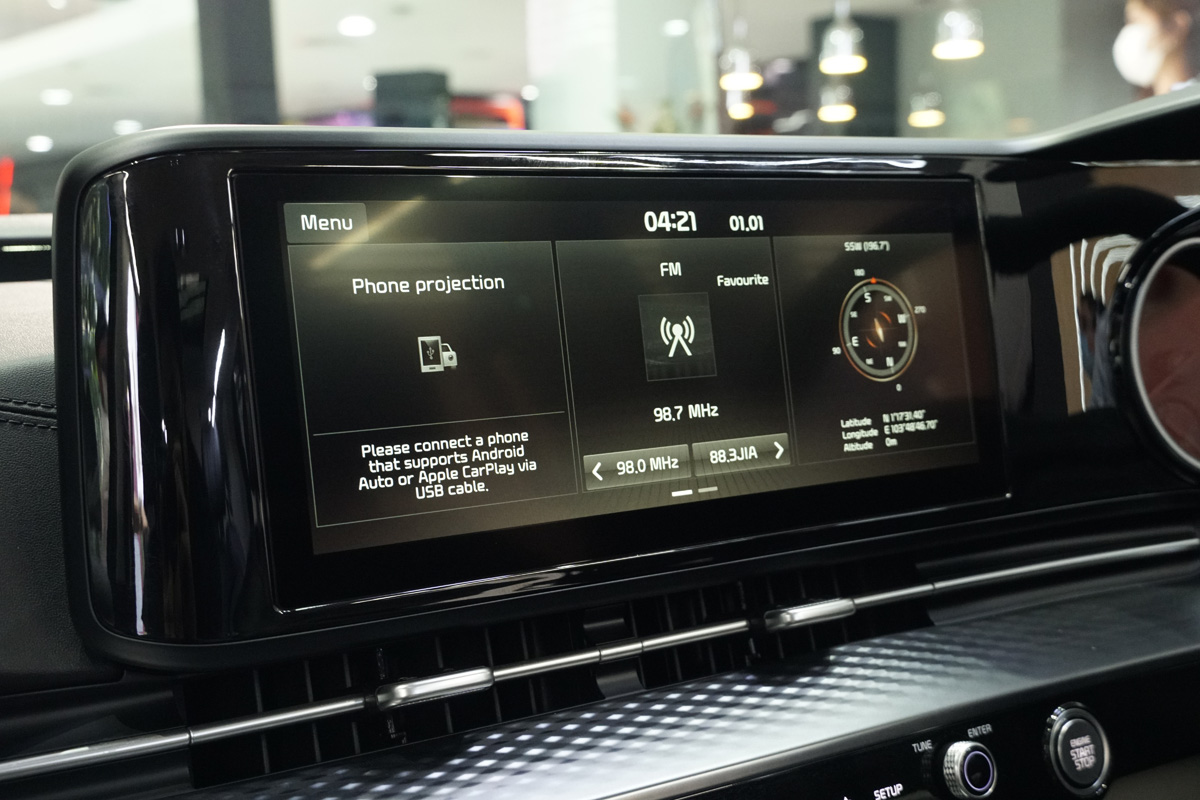 Local Carnivals do have the 12.3-inch infotainment screen, but not a 12.3-inch active driver’s display As a corollary, it’s missing the Blind Spot Monitor system (as seen on the Stinger and Sorento) that shows you a video feed of the side of the car when signalling, though it still has a blind spot warning system.

But that’s pretty much the only thing the car’s missing from our first look at it – back in August 2020 – as there’s a full active safety setup here: Adaptive cruise control, forward collision warning/avoidance, lane keeping. Additionally there’s also rear-cross traffic avoidance, a surround view monitor and parking distance warning. 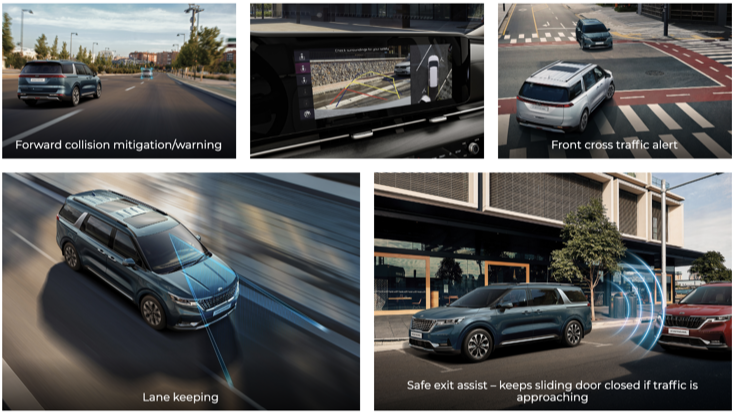 The typical Kia amenities are present: Keyless open/start, a wireless device charger, ventilated front seats (driver’s is powered), a sunroof, LEDs all around (headlamps, taillamps, foglamps, running lights), auto mirrors (folding and dimming). There are also sun-blinds for both rows, and aircon in the third row.  There are also four selectable drive modes – Normal, Sport, Smart, and Eco.

Pump up the jams

As an extra-big MPV, the Carnival adds features we expect to see in the segment, but also adds some features which we haven’t seen before. The seven-seat model has two ‘premium relaxation’ seats in the second row which offer more room and leg rests, commonly seen in big MPVs,  but they are electrically-adjustable, and come with seat heating/cooling which is rare. The seats can also be adjusted 85mm laterally, 80mm forward, and 320mm rearward for maximum legroom. A ‘Relaxation mode’ button shifts the seats into a reclined position automatically. The eight-seat model replaces the two premium seats with a three-seat layout, but it also has a few more party tricks: You can remove the seats individually and face them backwards, like a bus or train. Kia touts ‘Child Care mode’ (backward facing seats are safer in a crash) which will be a boon for parents wrangling their wrigglers in child seats. There’s ‘Table mode’ where the second row flips down to become a flat surface – perhaps good for road trips and card games. There’s als a Luggage mode, which expands boot space from 627-litres to a larger 2,905-litres with the second and third rows folded.  With the second row removed (the eight-seater can do this) there’s a staggering 4,100-litres of space.

While SUVs are where the action is at in 2021, it looks like the Carnival might inject life into the MPV party.