Kia Singapore Revives The Carnival After A Very Long Time

[This article was first published on oneshift.com]

With more buyers turning to SUVs today, car manufacturers have been keen to meet their demands. The market of late has seen the introduction of even more people-carrying variants of these off-roading-inspired vehicles, which also does threaten the rationale behind fielding an MPV within your product range. 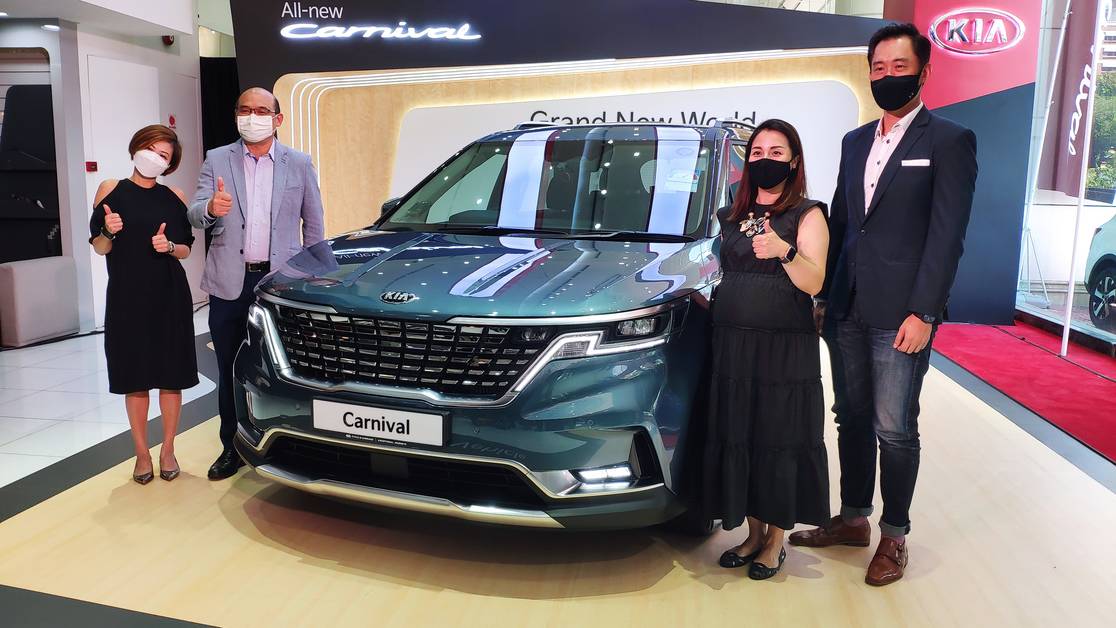 Korean automobile manufacturer, KIA has just launched their all new MPV… or GUV (Grand Utility Vehicle) in KIA talk. There is no mistaking that their largest MPV GUV is lightly disguised as an SUV, especially with its frontal styling. I mean, who says you can’t have your cake and eat it right? You get the best of both worlds… a car that has the street and in this case off-the-street cred of an SUV, with all the good trappings of an MPV; or maybe just the main advantage of lower ground clearance for easier entry and a more “glam” exit. I believe that there is no way you can make a dignified exit from the third row of a people-moving SUV in a kilt. 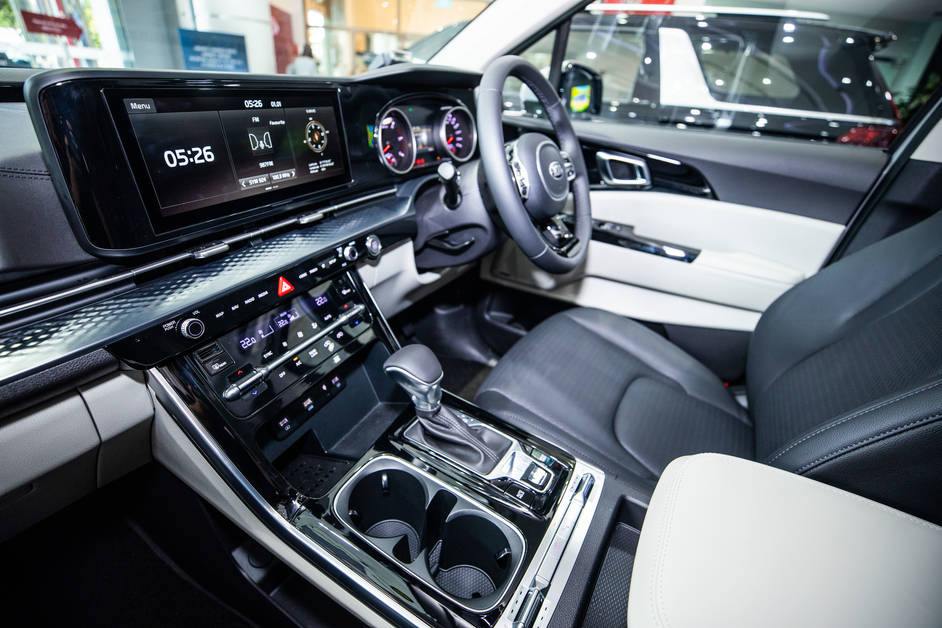 For Singapore, KIA skipped two generations of Carnival MPVs, before launching this all-new fourth-generation people carrier. Their new GUV is sold in both seven and eight-seater formats. The seven-seater which sports two individual ottoman seats retails for $211,999 while the eight-seater variant retails for $205,999; the latter we believe would be the better selling model.

The new Carnival features an evolution of KIA’s ‘Tiger Nose’ front end, subtle side styling, and like the first generation car, the new GUV gets practical automated passenger sliding doors. At the rear, its slim horizontal light cluster, made fancier by a stylish LED light strip, further differentiates the Carnival from the Sorento SUV.

And just like the Sorento, the Carnival here gets the same Smartstream 2.2 litre turbodiesel four-cylinder, as opposed to the available (elsewhere) 3.5 litre V6 NA petrol. The new diesel mill weighs 20kg lighter than its predecessor, and delivers 202hp and 440Nm, with drive supplied to the front wheels through an 8-speed transmission. With the oil burner, the Korean people carrier’s fuel consumption is pretty good too, delivering a lab-tested 14.5km/l; and all that torque is ideal for hauling the extended family. The KIA Carnival GUV receives a VES C1 rating, meaning that there is a penalty of $15k. On the inside, the infotainment system is fronted by a 12.3” colour screen, and both Android and Apple devices are supported (via cable). Interestingly, the Carnival does not receive a full-on digitised instrument cluster, meaning that it also does not get that neat Blind-Spot View Monitor (BVM). This feature, which is found on the Sorento, gives you a clearer digitised side mirror view, that is displayed on your instrument cluster… as long as you use your indicators.

Ventilated front seats are standard fare on both the seven and eight seat variants. The second row passengers in the seven-seater variant also benefit from this comfort feature. The seven-seater variant also boasts ‘Relaxation Mode’ where the second row of seats recline at a touch of a button. With a wheelbase of 3,090mm, the Carnival boasts a generous amount of interior room for all three rows of occupants. And with a height of 1,775mm, entering and exiting is made easy too.

The eight-seater on the other hand can have its middle left and right seats re-installed 180 degrees in the opposite direction, which KIA dubs ‘Child Care’ mode. The middle seat folds can also fold down to double up as a table; ideal if you do need to tend to your children, or pass around a loaf of bread with your fine selection of jams slotted within those moulded cup holders in the middle seat. The same middle row seats can also be removed altogether for added luggage room, which rivals a large van. For both cars, the third row seats fold flush with the floorboard for improved cargo stowage. The Carnival with all its seats deployed, boasts generous luggage space of 627 litres. With just the first row of seats in-use, the GUV boasts 2,827 litres.

Tech features-wise, there is plenty going for you, from lane-keeping assistance to Smart Cruise Control, together with forward collision avoidance or mitigation. What is also becoming a common feature among manufacturers is rear cross traffic alert, which warns you of passing pedestrians or traffic as you reverse out onto a road.

The new Carnival is a larger offering than the likes of the Volkswagen Sharan/SEAT Alhambra, both which are beginning to show some age, and the new Honda Odyssey. Larger MPVs like the Toyota Vellfire ($227,388), Alphard ($245,388) and the Nissan Elgrand ($187,800), sit well within the same playpen. 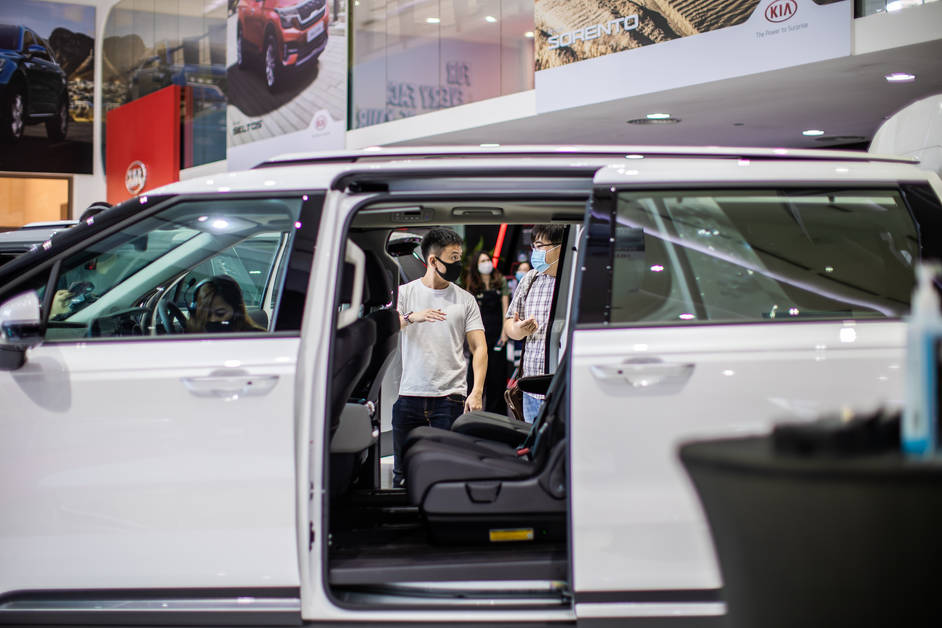