MPVs, once the mainstay of families, are no longer seen as fashionable.

It’s a pity because in the business of ferrying people, no other type of car does it as well as a big MPV. But as we all know, MPVs – along with all other types of vehicles – have been swept aside by the enduring popularity of SUVs and crossovers.

No matter how well-packaged, however, an SUV still cannot beat an MPV when it comes to moving people.

So, how do you make an MPV attractive again? You could make it sleeker and less boxy, and give it high-performance to boot. Or if you are Kia, you disguise it as an SUV and call it a “grand utility vehicle”. Okay, perhaps “disguise” isn’t the right word here, because the new Carnival is like an SUV with sliding doors.

It is a marked shift in design. Previous generations of the Carnival were all MPVs. Even the previous model, which sort of resembles an SUV, was still an MPV.

The current model, with its angular shape and sharp lines, is a huge sports utility vehicle. It even reminds me of the Chevrolet Suburban.

The Carnival’s dimensions are imposing, to say the least. It measures 5155mm from tip to tip and its overall width (sans mirrors) is already 1955mm. A generous 3090mm wheelbase means plenty of room on board.

Very few cars will want to cut into your lane, and those who filter in will only do so after politely indicating.

Somehow, the extra-large “tiger nose” grille seems as necessary as a second exclamation mark. The car’s profile and rear angles are much nicer to look at. The slim tail-lights are a classy touch – it shows restraint, which is a good thing.

As the sliding doors open, the first things you see are the sumptuous-looking captain’s chairs, which have built-in ottoman leg rests.

If you want to feel like a big boss or chaebol chief, settle into one of these chairs and recline it. It is almost like sitting in a business class seat on Korean Air – minus the large screen.

Accessing the Kia Carnival’s third-row seats is pretty easy, too. Passengers can either squeeze past the two captain’s chairs or move either of them forwards while tilting the seat backs to create a fairly large ingress/egress space.

The second-row might be “business class”, but that does not mean that the last row is “economy class”. It is actually more like “premium economy”. 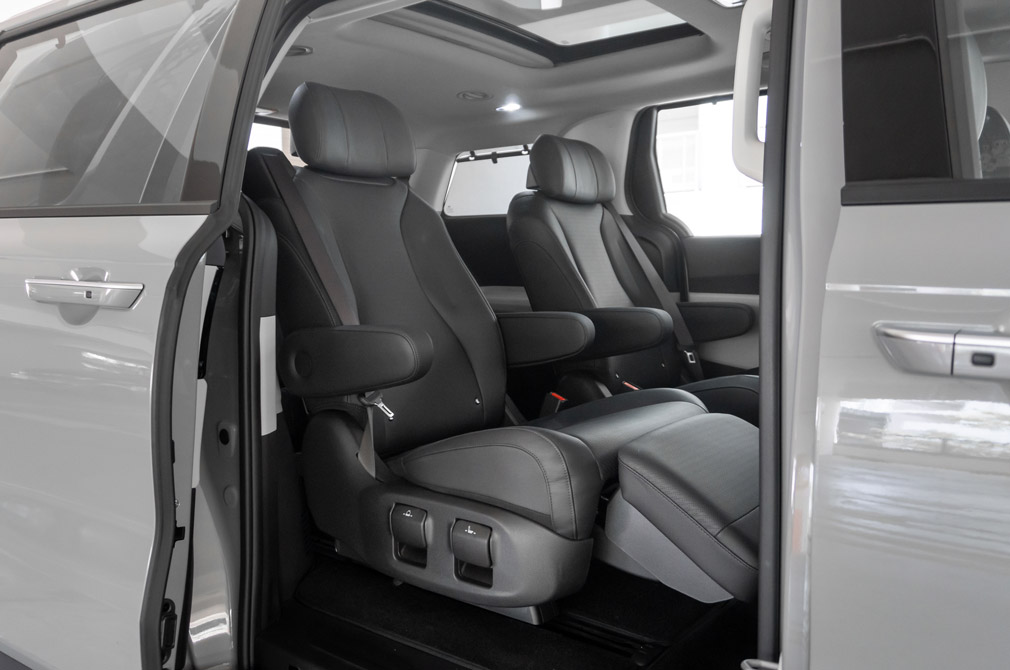 Although you do have to raise the headrests to be comfortable, legroom is relatively good. Plus, as long as the three occupants here are of average size, it should not be too tight of a squeeze.

As a multi-purpose vehicle, the Kia Carnival is also quite versatile. Even with all seats in place, you have 627 litres to play with.

With the rearmost seats folded and stowed in the floor, you now have a flat surface and 2785 litres of cargo capacity (2827 litres for the 8-seater Carnival). The space is good for bulky items, or even a full-size bicycle.

If it’s the latter, loading it will be pretty easy. You can just wheel it in and park the front wheel between the captain’s chairs. Driving the Kia Carnival is like piloting a land yacht on calm waters. It is relatively quiet for such a huge car. The Carnival glosses over pockmarked roads with ease, and is pretty good at gliding over speed bumps as well.

Its ride quality is on a par with the well-known Toyota Alphard/Vellfire, which is not unexpected.

Surprisingly, the Carnival can be rushed through corners. It is no hot hatch, but it holds up relatively well. I am sure that the captain or captains of industry in the second row would not mind – especially if they’re late for a board meeting.

In fact, the boss probably won’t mind taking the helm once in a while because despite its size, driving the Carnival is not a chore. Motivating the Kia Carnival is a 2.2-litre turbo-diesel capable of 199hp (202PS) and a healthy 440Nm. Paired with a smooth-shifting 8-speed automatic, the powerplant can get the Carnival from a standstill to 100km/h in 10.7 seconds.

The engine’s pulling power is good. You’ll even have to temper your inputs because it’s actually easy to spin the front wheels. And the motor is fairly quiet, too, with barely any clatter entering the cabin.

Aiding the driver is a long list of safety and convenience features, which include Blind-Spot Collision Warning, Smart Cruise Control and Forward-Collision Avoidance Assist. Parking is made less tricky with the Surround View Monitor.

The absence of a digital instrument cluster is odd, given the advanced cockpit and numerous high-tech features.

However, it’s a bit disappointing that the Kia Carnival does not have a digital instrument panel, which would have complemented its many advanced functions.

Also missing is the real-time camera feed for the blind spot monitor, which shows footage from the side that the driver is indicating towards. It would have made changing lanes a bit easier.

That said, the absence of these two features does not make the Kia Carnival any less attractive or compelling.

Say what you like about its looks, but its design is unique. There is no other MPV in Singapore that is styled to resemble an SUV – the most popular type of vehicle today.

Will MPVs ever become the mainstay of families again? That remains to be seen. But what is clear, at least in the case of the Carnival, is that they are still the best way of moving people around.