Kia’s Carnival might look space age, but it edges ahead on solid MPV ground in Singapore thanks to huge space, lots of features, and a decent drive

SINGAPORE
Space might be the final frontier, but here in Singapore it’s already a big enough hurdle to cross with property prices being what they are.

And if car buyers bought their wheels like they did houses, the Kia Carnival would be a sold-out development since it packs a lot to love within its considerable real estate.

Even before its debut in late April 2021 – read our news story for full details on pricing and equipment levels – the fourth-gen Carnival MPV generated a lot of buzz as one of our most read and searched-for news stories.

Why? Here was a very spacious, feature-rich and very large MPV that could be less expensive to run and own than similar-sized Japanese ones, while not looking totally like a box on wheels, and even injecting some interest too. Having tested the new Carnival, we think it lives up to its potential and then some, and it’ll bring some spunk to drivers who need to cart around more than five people at a time.

The Carnival is an extra-large MPV – far bigger than a small MPV such as the former Kia Carens or VW Touran, and bigger still than a VW Sharan or Seat Alhambra. In fact, at 5,155mm long, it’s the longest ‘pure’ passenger MPVs here. Larger MPVs have their roots in commercial vans, such as the Maxus G10 and Mercedes-Benz V-Class.

The car’s key rivals are Japanese: the Toyota Alphard and Vellfire, and the Nissan Elgrand. These cars are relatively popular here, despite their S$200k+ price, they are known quantities and tall, boxy, and uniquely Japanese. 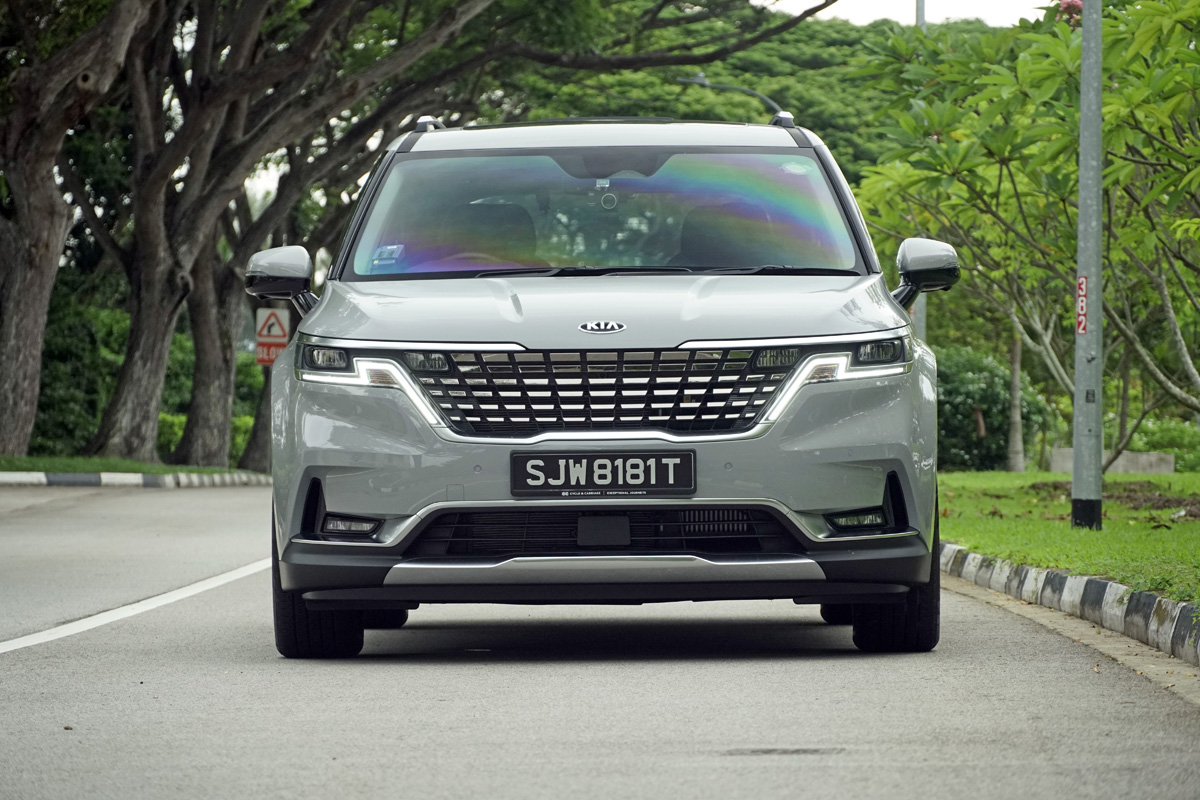 The Carnival goes for a slightly different tack: It’s longer than those cars, and not as tall, so its proportions present a sleeker profile almost like a tall estate. But like the Japanese cars, it doesn’t hide its size, but plays this as an advantage.

The broad grille spreads out across the front, blending into the high-mounted, unique split headlights, as well as the jagged daytime running lights. The flat, broad lower section has its own bash-plate style guard and fog-lights in the corners, and it makes for a car that looks rugged and imposing. The rest of the design sees typical MPV cues, but they’re not boring: the C-pillar has a textured chrome to break up the expanse of glass, and the taillights are joined by a lightbar, above which is a hidden rear wiper.

All in, the new Carnival presents a funky soft-road-ified facade, one that implies that the business of people-moving needn’t be all humdrum MPV boring. We saw a similar tack in the ‘SUV-ification’ of the 2021 Honda Odyssey – and it makes the twice-facelifted Odyssey look almost totally new and fresh. In the Carnival’s case, it makes for a front end so eye-catching you miss the minivan-ness. There’s 3,090mm of space between the Carnival’s front and rear axles, so naturally there is a tremendous amount of room inside. As our launch news mentions, there is an eight-seat model with reversible bench on sale too, but we’ve tested the seven-seat model, where the three-seat second row is replaced by dual captain-style chairs. The second row thrones can be shifted both sideways, as well as fore-and-aft. Moving them inwards allows you to clear the rear wheel wells and push the seats back into ‘super-legroom’ mode. In that position, you can even recline to an almost horizontal position, which would be useful for naps on long journeys. While the seat’s on-floor position controls are manual, the seats themselves feature electric adjustment for everything else, including the legrests, and also have seat ventilation – these are stand-out features and aren’t commonly found in captain seats, even in luxury limousines. Walking to the last row isn’t too hard, even with the dual thrones closer. While it’s not as tall as an Alphard, the Carnival isn’t neck-achingly short either, which means there are no headroom issues either.

The last row feels like the second row of a small car. Two adults will fit in comfort, and even with decent legroom, but a third will mean shoulder-squeezing. That’s still far better than a seven-seat SUV or smaller MPV though, where three in the last row is impossible, and the seatbacks are adjustable for angle too. So if you need to carry seven adults, the eight-seat model will better suit your needs, as the seven-seat model is able to cart around six adults with lots of room all around, and a plus one with a bit of squeezing.
Boot space is ridiculous – 627-litres (more than a big sedan ) even with the third row in play, thanks to an in-floor cargo space. It can accommodate very tall items, but if you need more space, the third row folds flat with one pull of a handle. Push the second row as far forward as it’ll go and you have 2,000+ litres of space, while the eight seater can remove all of its chairs for an insane 4,100-litres. In other words, if you need to carry more than that, just get a damn lorry. The Carnival has the same equipment for both its models, though the seven-seat version has a tiny bit more stuff related to the captain’s seats. While the Carnival isn’t an inexpensive car, at S$200k with COE, it does deliver conspicuous value with a well-made cabin and a long, long list of features.

As we saw in the current Sorento SUV and Stinger grand tourer, Kia’s capable of far more than just affordable cars, and it continues in the Carnival. There’s little to fault in terms of build quality, and while there’s lots of plastic the cabin isn’t tacky or cheap-feeling. The patterned metallic trim strip reflects that of the C-pillar, there’s interior ambient lighting, and the liberal use of gloss ‘piano’ black plastic is nice – as long as your hands are clean. The very-Mercedes dual 12.3-inch screens aren’t in our Carnivals like abroad, instead we have conventional instruments with a smaller display screen. It’s not a huge loss, although a glass cockpit surely looks nicer, and the infotainment screen is still a 12.3-inch unit, that’s zippy to use, and plays nice with Android and Apple smartphones. We also found useful: The wireless charging, ventilated seats, lots of cupholders, and a colossal armrest storage box big enough for takeaway to fit in. The convenience doesn’t stop at the front, either. Powered doors are de rigueur on big MPVs, and the Carnival also has an auto-tailgate with ‘approach to open’ function. All three back doors can be controlled via the key fob, and it can do remote engine start too. There’s aircon controls for the second row, and two vents per row for the rear section, with the captain’s chairs also being powered and ventilated too, plus a sunroof for the first and second rows. With a focus on moving people, here’s where MPVs usually drop the ball. But the Carnival can hold a netball team, and it doesn’t trip up when it comes to footwork either.

There are four drive modes, but you’ll do best just leaving it in ‘Smart’ all the time. There are no paddle shifters, and you’ll have to supply your own exciting engine noises since it’s a diesel. The car’s 2.2-litre turbodiesel is a great match for a seven-seater – as it was in the Sorento. It sounds like a diesel, with the extra clatter, but it’s no more troubling than a European diesel, or Volvo’s direct-injection petrol units. The 440Nm of torque allows for quick acceleration whenever needed, though as a diesel it hasn’t much of a top end.

Still, the Carnival gets up to speed with pleasing alacrity, and the eight-speed gearbox is buttery smooth, with almost seamless shifts, making it feel almost electric vehicle-like. The ride quality is impressive, lacking the stiff crash many MPVs have. There’s a little thump over more obtuse bumps such as expansion joints, and you’ll feel a little flex in the rear seats, but it’s not an old-school MPV where you hear the windows and doors shake and rattle.

While the steering’s a little lazy, the Carnival handles well, staying planted and predictable even at high speeds. Pair that with a good level of refinement, and we can imagine this to be a great car for a Malaysian getaway (remember those?).

As a diesel the Carnival’s kinder at the pump than many large cars. At the end of our test drive of 150km (shared with Ju-Len, no less) we nabbed 8.1L/100km, which is excellent for a car of this mass. None of those cars quite have what the Carnival does, since it blends huge space with an impressive level of driving dynamics, and even efficiency at the same time. In fact, we almost have no complaints, other than the excessive use of black plastic in the cabin.

The only thing to really consider is the diesel bit: It’s not super kosher in the electric age, even if it consumes less, for one. Diesel’s being phased out in 2025, though it has no bearing on new car sales for the short term. More importantly for a carbuyer’s wallet, you’ll pay S$2,052 in road tax a year, compared to S$1,390 for a similarly-sized petrol, and even the 2.5-litre petrol Alphard asks S$1,792. Where you’ll make it up is at the pump – high-mileage drivers will certainly save in the long run.

But even ignoring the diesel question, it’s quite clear Kia is laying down a convincing beat with the Carnival. It’s an excellent MPV that looks good to boot, a car with no major faults, and a huge list of features that make the price tag of just over S$200k seem utterly reasonable.