[This article was first published on www.topgear.com]

Comfort takes front seat in the new Citroen C5. With ample legroom even in the triple rear seats, this new car comes complete with extra hydraulics that ensures smooth journeys even on rough surfaces. 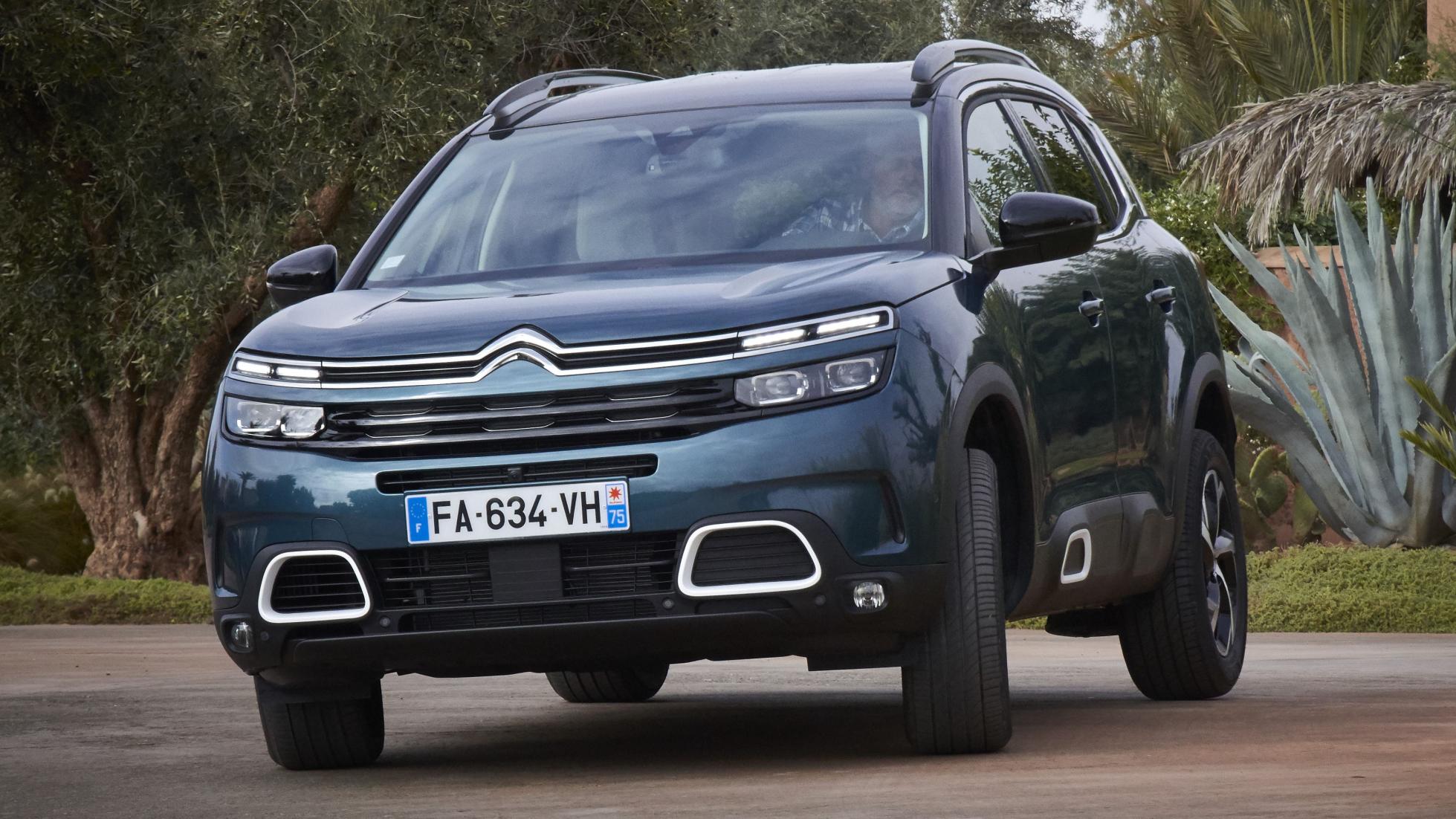 The C5 Aircross is Citroen’s leap onto the family-crossover bandwagon. Late, yes, but at least it’s got something to say for itself, so’s to avoid sinking into the me-too morass.

Its design, inside and out, rejects the orthodoxy that mainstream crossovers should prostrate themselves before the altar of sportiness. Who wants their little darlings vomiting in the rear footwells while dog howls as he’s chucked around the boot? Instead, like other recent Citroens, the C5 Aircross’s shape articulates an inner comfort and a cheery practicality.

It’s not just a pose. While the Aircross is based on a familiar Group platform (3008-Grandland), Citroen deploys some interesting engineering and packaging innovations to back up its visual message.

The suspension uses pretty-well unique dampers, in search of a caressing ride. Their principle was actually invented for keeping Citroen’s rally cars on the ground, and is still used on the C3 world rally car. But here the purpose is comfort rather than banzai-speed control. The seats too use novel construction to pamper your backside.

The cabin leverages Citroen’s people-carrier experience in pursuit of equanimity for all the passengers, as well as inanimate clobber. Citroen’s research says lots of people have shifted out of MPVs into crossovers, and then felt thwarted by their hatchback-like cabins. The C5 Aircross is supposed to be the remedy: crossover without, MPV within. Ish.

Five individual seats each slide and recline. That should ease at least one source of inter-sibling second-row friction. The boot and in-cabin boxes are pretty huge.

The C5 Aircross launches with familiar Peugeot-Citroen engines, though upgraded to the newest emissions standards. It’s FWD only, but you can order a switchable set of ESP parameters and hill descent control to help when it’s slippery or steep.

A plug-in hybrid arrives early in 2020. The big draw with that one will be better fuel economy for commuting, and lower tax. Interestingly Citroen elected to make its PHEV front-drive only to keep the price down. Whereas Peugeot, which sells 3008s at a higher price, went for a more expensive PHEV system with 4WD via an extra rear-mounted motor.

Rounded corners and smooth surfaces bleed away any aggression from the looks. But the geometric simplicity and straight lines give it a formal discipline, saving it from any melted cuddliness. Airbumps bubble-wrap the lower bodywork against the biffs of urban life.

The separate roof panel lends itself to customisation, and Citroen takes it further with coloured trim rings and strips. Take care, or you’ll find yourself back in cuddly territory. It’s a car, not a baby-walker. 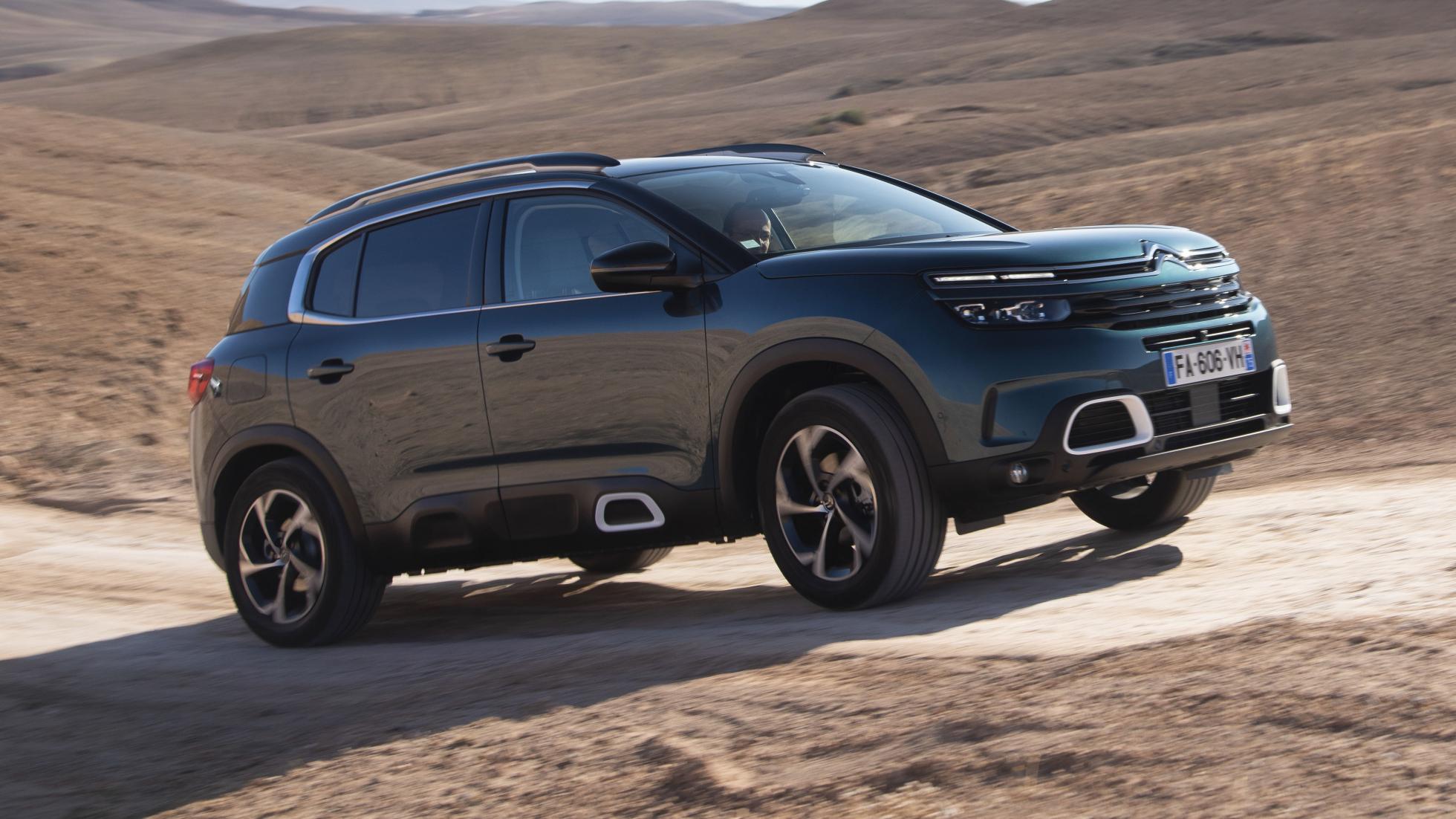 As promised, it’s soft-riding. On many or even most roads, wonderfully so.

The suspension’s trick is to use extra hydraulic reservoirs that bleed through progressively smaller holes as the damper reaches the ends of its travel, either in compression or extension. It means the Aircross can have extremely soft springs in the centre of the travel to keep it comfy on normal surfaces, but it maintains control when things are really rough.

Sure enough, much of the time it wafts along as if borne on air, especially on medium-smooth surfaces. We also drove it on some diabolically rough pretend-roads towards the Moroccan Atlas. It’s an odd mix, though, because bad sharp edges will send a clang into the body, and there’s a bit of steering column quiver too.

Add that quiver to the light steering, and the Aircross can feel a little wispy. A Touran, which proceeds by more solid-sounding thuds and thumps and has stiffer steering, feels heavier. Some people prefer that German solidity, some the French levity.

So does all that softness translate into a vague steer? Not if you drive smoothly. Twitch the wheel and you can get out of phase with it. But if you pour it through bends progressively, it answers accurately and can make brisk progress.

Roll is certainly a thing, but if you’re expecting a drunk’s unsteadiness, you’ll be surprised at how resolute it is. It’s also largely resistant to understeer, especially the petrol, which is 100kg-plus lighter than the 180bhp diesel.

So yes, the steering’s very light as well as indirectly geared. Pressing the sport button (an incongruously labelled thing in a car with this mission) dials in a little extra weight, but it’s just a false inertial resistance rather than a plausible reduction of assistance. At least the featheriness of the steering matches the pedals – it’s a car you caress rather than wrestle.

It’s quiet. At a cruise that’s down to well-supressed tyre noise, and on acceleration the engines keep their peace. We had a go in the 2.0 diesel and 1.6 petrol which are the top pair and both make 180bhp. They both do 0-62 in the eights, but it’s the petrol that feels the more eager.

Both come with an eight-speed autobox as standard. It’s a bit fidgety in the petrol, especially in sport mode, so you might just press an M button and get manual control via paddles. Well, they’re little switches really, mounted on ears behind the steering wheel.

If you don’t have to deal with loads or hills, the cheaper 1.2-petrol-plus-manual combo should be surprisingly pleasant and keen. That’s based on our experience in the Peugeot 3008, mind, as we haven’t tried it in the Aircross yet.

The driver-assist on the top-spec Aircross will ease you along the centre of a motorway lane and keep your following distance to the car in front, and in the auto it runs right down to stop-go traffic. It works just as smoothly, and just as not-smoothly, as the best systems in rivals. So usual caveats apply: don’t cede control.

Active safety braking is standard on all, which you’d expect, and so’s blind-spot warning, which you wouldn’t. Citroen’s dogged insistence on not being like other crossovers continues in the cabin. The seats look flat, more like lounge furniture, and the dash and doors carry rectangular pads like the bar in a diner. It’s pretty refreshing actually.

And the seats are a lot more comfortable than they look. A soft layer of foam relaxes around you, but firmer shaping beneath holds you for the distance. The top-end driver’s chair has multiple electric adjustments. Also massage programs from the subtle to the borderline kinky.

Those three back seats give decent legroom when they’re slid back. If there aren’t three tall adults back there, one or two can slide forward to free up even more boot space. At minimum you have 580 litres, but progressively uprighting the backrests and sliding forward opens up 720 litres. Fold them all flat and it’s 1,630. The boot floor has two levels, so you can hide stuff beneath.

A big centre console bin and glovebox take cabin storage to 33 litres, or a whole big bunch of picnic and devices. For which there’s an inductive charge pad in some versions, and phone mirroring in all. It’s not brilliantly integrated though – your CarPlay track isn’t named in the ‘media’ section of the instrument screen, and it’s not a simple process to bring you back to CarPlay on the central screen if you’ve been elsewhere.

Also, the centre screen is loaded with the temperature, fan and direction controls buttons and menus – the only climate hardkey is for demist.

Switching between screen menus is more satisfying on a Peugeot 3008 because though it runs the same system, the shortcuts themselves are nice aluminium keys. On the Citroen they’re shiny plastic touch buttons like a cheap microwave.

Well, Citroen had to scrape back some cost to pay for those triple rear seats and the complicated dampers. For the same reason there are some biggish swathes of hard plastic around the Aircross cabin, but they’re mostly not where your fingers come to rest.

Phone mirroring on every version means you’re got traffic-aware navigation whenever you’re within signal. Step up a trim level and the inbuilt system uses TomTom maps with their own traffic.

Citroen’s built-in dashcam is available, recording automatically when there’s a big braking event, and sending it to your phone.

The driver’s instruments are also all-virtual, in a 12.3-inch screen. The graphics are unique to Citroen, just as DS and Peugeot have their own skins for the same underlying system. You can roll through different displays that emphasise the trip computer, navigation arrows or driving-assist info. But you can’t get a proper round speedo or rev-counter – the big digi speedo is easy to read, but the rev-counter is a tiny bar graph, smaller than the fuel gauge, surrounded by vacant space. Another reminder you’re not supposed to be feeling sporty. 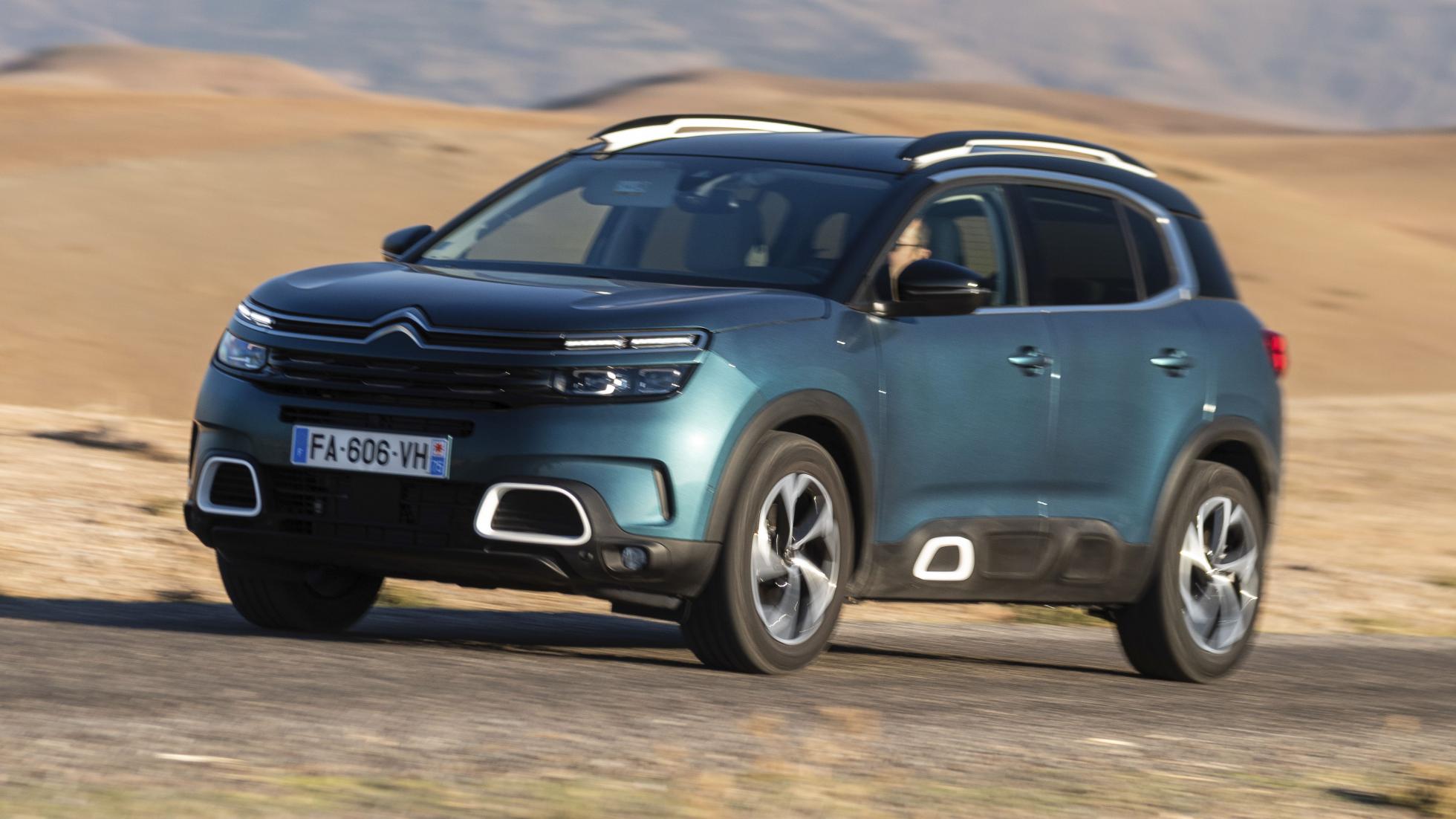 Citroen has aimed the retain prices at Nissan, Ford and Hyundai rather than VW. Lease and PCP rates should be fairly low, because at launch the residuals are looking strong. Sister brand Peugeot has done well at keeping prices firm on its used crossovers in the UK, and those lessons will be applied here.

CO2 numbers start at under 110g/km for the small diesel in manual or auto, rising to a not-bad 129g/km for the 180bhp petrol auto. BIK varies between 24-29 per cent, and given the competitive prices that’s not bad at all.

Only one in 10 sold in the UK are likely to be the base trim, known as Feel. Even so it’s not too stripped out. Beyond that, two more levels get parking cameras, connected nav, extra driver assist, handsfree tailgate and a big glass roof. You could guess.

The only conspicuous thing missing is LED or even xenon headlights. Oh and there’s just one non-optional paint, flat white. But the unbroken band of glazing means it doesn’t look too municipal.

Final thoughts and pick of the range

“New C5 Aircross won’t scratch your drivers’ itch, but it’s a part-of-the-family kind of car, at ease with itself.”

We’d find it hard to scratch our driving itch by using one of these full-time. It’s a bit too laid-back. But that’s just us.

When you look at the way family crossovers are used and driven, this one seems impeccably targeted. It looks smart without being pushy. The cabin is also visually literate without any po-faced seriousness. It’s quiet and easy to drive. Most of all it’s extremely habitable: useful, comfortable, roomy, versatile. A part-of-the-family kind of car, at ease with itself.