[This article was first published on www.goodwood.com. Vehicle specifications may vary by market.]

The third generation C4 is here, now with a bigger focus on comfort than ever before...

There is an overwhelming amount of choice when it comes to C-segment hatchbacks, and manufacturers will do anything to make their offering stand out. And Citroën has never been afraid of an eye-catching design, from the 2CV to the quirky Cactus. This latest, third generation of the C4 is no exception, with a crossover-inspired design and styling cues stolen straight from the manufacturer’s futuristic concepts.

But perhaps the most standout feature of the new C4 is the comprehensive package offered for its relatively low price (starting from £21,005). Available with a petrol or diesel engines with various power outputs and a manual six-speed or automatic eight-speed gearbox, it comes packed with safety and comfort-enhancing electronics. Of the four trim levels – Sense, Sense Plus, Shine and Shine Plus – even the base option comes complete with alloy rims, dual-zone climate control, cruise control, electric windows and automatic headlights and wipers.

We put the lower-middling spec Sense Plus, powered by the PureTech 130PS (96kW) powertrain, through its paces. Citroën has come a long way since the plasticky practicality of the Cactus, and the new C4 boasts an abundance of features that wouldn’t seem out of place on a more premium model. However, there remain some odd design cues – the seats feature a strange stitching pattern, while the wing mirrors resemble lopsided ears. But these quirks are negatable in the grand scheme of things, which boasts an altogether sharper look than the C4s of b4 (I’ll see myself out).

A futuristic, concept-derived lighting signature sits at each end of the model – remaining distinctively Citroën at the front, while pinched rear lights come together via the ‘aerodynamically efficient’ spoiler. The bonnet is tall – SUV tall, in fact. And that’s intentional, with the French carmaker leaning heavily on the crossover segment in designing this car. A raised ride height, plastic trim around the wheel arches and large 18-inch rims with fairly low profile tyres all conspire to make this hatchback stand physically proud of the competition.

As well as the four trim levels, there’s a breadth of personability available too – including but not limited to the different colour options for the fog light surrounds and ‘capsule’ (Airbump) on the front doors. Think of the latter like acute accent on the C4 package… 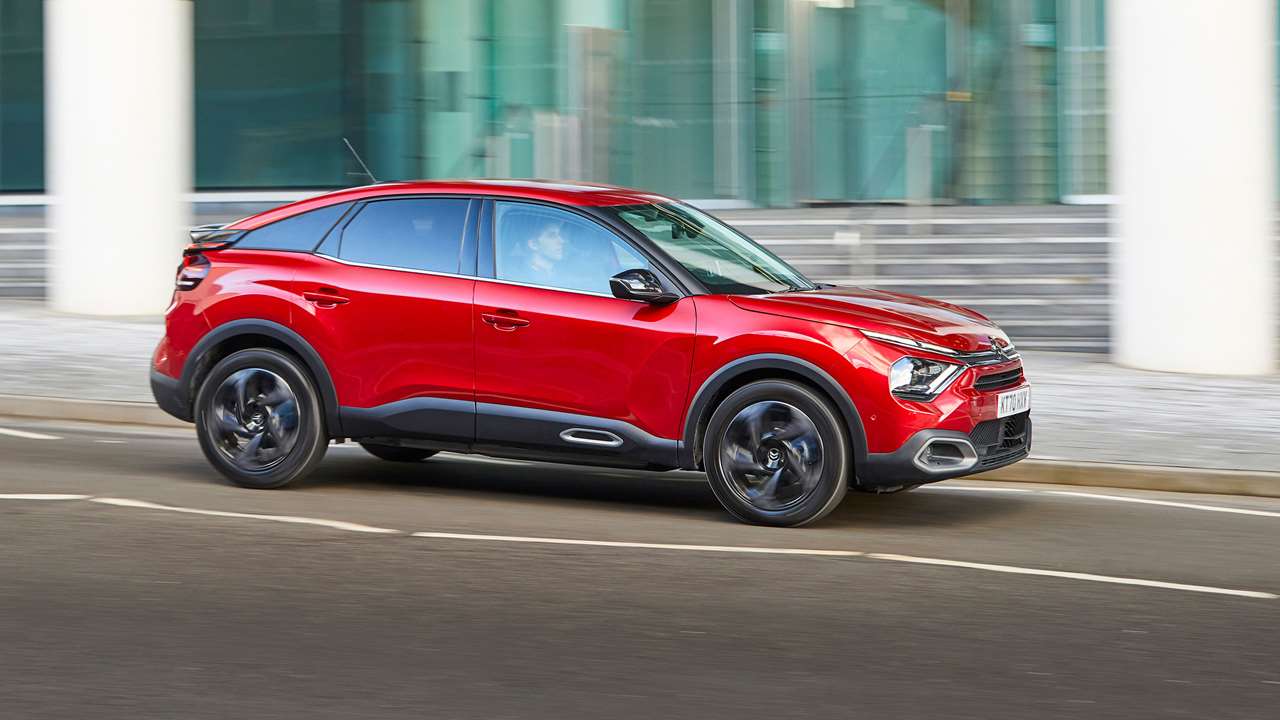 The new C4 experience is remarkably quiet at first, with the 1.2-litre, three-cylinder PureTech petrol engine powering up with little fanfare. In fact, driving it is a rather docile affair, with the engine whirring away silently until you need to accelerate heavily. And that acceleration, courtesy of the 130PS (96kW) and 230Nm (170lb ft) outputs sees the car pulling hungrily from low revs. While it’s not particularly fast – this variant takes a smooth 8.9-seconds to reach 62mph – it’s enough to send the C4 rocking back on its soft suspension, before a touch on the brakes send the mass on to its nose. Citroën call this the ‘flying carpet ride’ offered by its progressive hydraulic cushion suspension system, but I found it remarkably lolloping, with a lot of body roll through corners. Admittedly, the hydraulic bump stops of this system do swallow digressions in the road surface (of which there were many) well.

Continuing on the soft theme, the clutch requires little effort, while the six-speed manual gearbox offered shifts as gentle as a limp handshake. The steering is OK, nothing more, nothing less, and offers a realistic response at high and low speeds. Just under 1.5 turns will take you lock to lock, and the 2,670mm of the Common Modular Platform wheelbase provides an impressively tight turning circle. While the engine itself is remarkably quiet, there is a surprising amount of wind and road noise at speeds above 50mph, with those wide, low profile tyres audibly feeding back every blemish in the road.

The cabin is certainly comfortable, however, with a reported extra 15mm of foam making the broad fabric front seats enveloping (but not particularly bolstering), while the higher spec models boast heated leather pews as standard. The steering wheel seems a little smaller than I would expect, however it offers a breadth of manual adjustment.

In the rear, there’s a class-leading 198mm of leg room, which comes only slightly at the expense of the 380-litre boot – it’s still roomy enough for a decent sized dog, or a small family’s worth of luggage (should we ever be able to go on holiday again). For the smaller items, there is an abundance of cubby holes, including the novel, if not slightly gimmicky, tablet support and drawer.

Our test model featured gloss plastic trim throughout the cabin, which while intended to lend a premium feel, did quite the opposite. It was a magnet for grease and dust, and appears likely to scratch or mark easily. An abundance of tech may not be the first thing that springs to mind when you consider the C4, but Citroën has done an impressive job of packing a lot in. As standard, the model features a built-in dash cam, head-up display (a useful, inobtrusive one at that) and a 10-inch touchscreen, complete with mobile connectivity.

There are 20 Advanced Driver Assistance Systems, including the Level 2 autonomous ‘Highway Driver Assist’, which combines adaptive cruise control with lane keep assist. To its merit, the latter is weak and inobtrusive, and instead of wrestling control from the driver, gently hints that you might want to centre your vehicle in the lane.

The forward sensors – known as ‘Collision Risk Alert’ in this package – are as overzealous as ever, while other random warnings flashed up alarmingly when not required. Still better to be safe than sorry, right?

Oh, and one other thing: it’s always nice to have a physical key to turn rather than the ever-elusive remote fob. After 17 years, two generations and almost 3 million units sold, Citroën’s C4 shouldn’t have anything left to prove. However, for 2021 it has evolved into an even more comfortable, capacious hatchback-come-crossover, which offers carefully considered features in an well priced (prices start from £21,005) package. With a confidence-inspiring raised ride height, and an abundance of passenger safety technology, it promises the comfort and security sought in many small family wagons. And while the ride is anything but exciting, it’s gentle and smooth (if you ignore the body rolling), with the hydraulic bump stops doing exactly what they claim to.