[This article was first published on www.whatcar.com. Vehicle specifications may vary by market.]

Of the group of quadruplets that it’s a part of, the Citroën Berlingo is probably the best known. In van-with-windows form, its no-nonsense practicality made it a firm family favourite, and the unglazed commercial version uses its adaptable nature to earn money for the many businesses that buy them. And now, along with its Peugeot e-Partner, Toyota Proace City Electric and Vauxhall Combo-e relatives, you can buy it with electric power.

The Citroën e-Berlingo is a small electric van with a commendably sizeable range. It uses the same 136bhp electric motor as its near-identical siblings, with power coming from a 50kWh battery pack. Officially, that battery gives the e-Berlingo enough stamina to travel for 171 miles.

So as not to tread on each other’s feet, each of the four aforementioned electric vans appeal to a specific niche in the market. The Vauxhall e-Combo, which has the lowest specification of the bunch, is cheaper than the e-Berlingo, which – along with the very slightly swisher Peugeot e-Partner – is aimed squarely at satisfying the needs of large commercial fleets. The Toyota Proace City Electric is more lavishly equipped, but pricier, and aimed at those independent operators and tradesmen who keep their vans for the long term.

Like the others, the e-Berlingo can carry a payload of up to 800kg, with two body sizes available, from 3.3m3 to 4.4m3 of cargo. There are two trim levels to choose from; Enterprise Pro or more generously equipped Driver Pro. This latter version is rather more lavish than its Renault Kangoo ZE, Nissan e-NV200 or Maxus E Deliver 3 rivals.

What it’s like to drive, and how quiet it is

While electric cars tend to offer church-mouse quietness, that’s not always the case with vans. You can blame the wind noise generated by their boxier shape and bulky door mirrors for that.

The Citroën e-Berlingo, though, is pleasingly hushed. Partly because it’s packed with a lot of sound-deadening material, and partly because its door mirrors are actually quite small.

You will hear a background hum from the electric motor, but it makes nothing like as much noise as the diesel engine in the regular Berlingo. The electric version is far more responsive to your right foot, too; the electric motor’s 192lb ft of torque is available from the moment you press the accelerator

The absence of a big, heavy diesel engine up front helps the e-Berlingo’s handling, too; with its batteries mounted beneath the floor, the centre of gravity is much lower, reducing the van’s tendency to lean in corners. In fact, while we’ll not name any names, there are a number of combustion-engined cars that are less enjoyable to drive than the e-Berlingo, not least thanks to its accurate steering, strong grip and well-balanced feel. 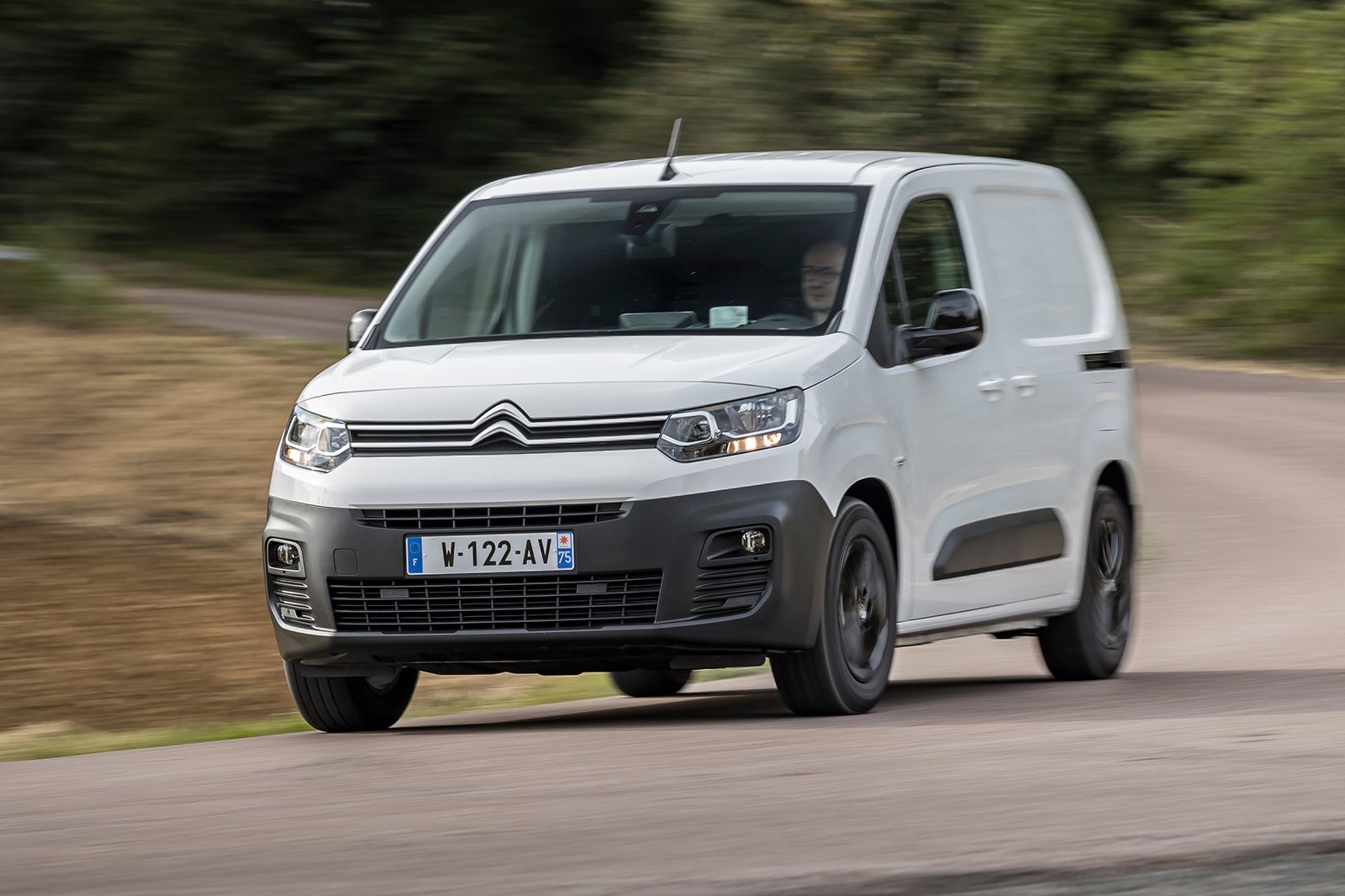 The interior layout, fit and finish

“Smart and relaxing” accurately sums the e-Berlingo’s interior up; the former because it’s made from high-quality texture plastics that are the equal of many a family car’s, and the latter because of how it puts you at ease.

Part of that is thanks to the driver’s seat, which offers lots of adjustment (including for lumbar support), and that’s mirrored by a steering wheel that adjusts for reach and rake. The heating controls are sensibly mounted where they’re easy to reach, too.

You get a 10in digital instrument cluster that’s far clearer than regular analogue dials, and gives you all the information you need about power consumption and range. You also get

an 8.0in touchscreen infotainment system, which is helpfully angled towards the driver. It supports Apple CarPlay and Android Auto, too, and Driver Pro trim adds built-in sat-nav.

The relatively small door mirrors that we mentioned earlier do take their toll on rearward visibility, though. However, you do get rear parking sensors, and Driver Pro trim lessens this issue by providing you with Citroën’s Surround Rear Vision camera system, which can display both a rearward view and a view of what’s in your passenger-side blindspot.

Those mirrors, by the way, can electrically fold to reduce the risk of damage when parked, and to assist when squeezing into narrow gaps. Automatic headlights are standard, too, for added convenience in failing light. 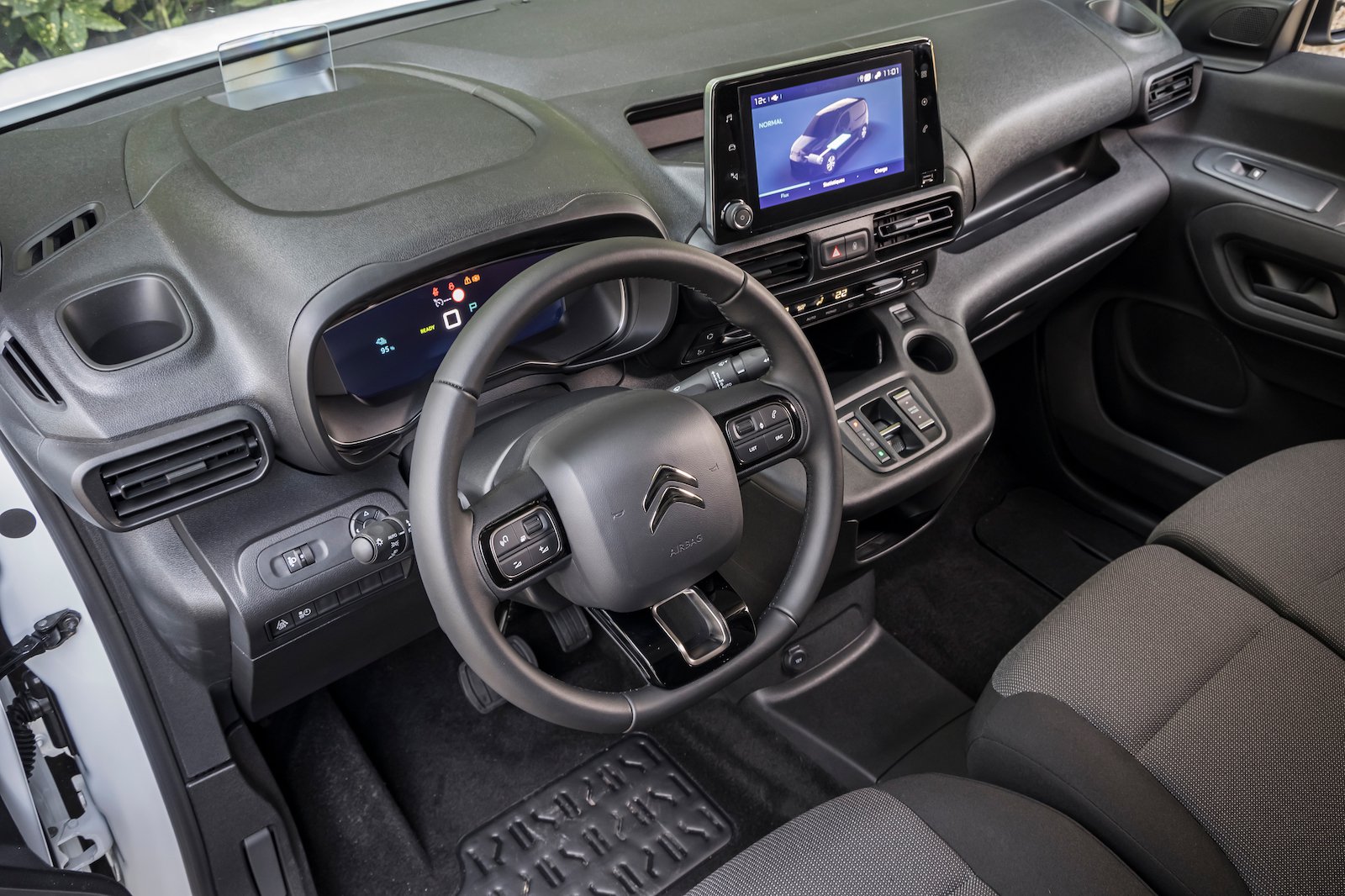 How it copes with people and clutter

Whether big or small, a van needs to be practical, and while the e-Berlingo ticks a lot of boxes in this regard, the Extenso seat (standard in Driver Pro trim) is the icing on the cake. Not only does it enable the dual front passenger seat to fold completely flat for additional storage, but it also doubles as a useful table that you can work from.

In terms of dimensions, the e-Berlingo M and XL have a maximum load length of 1817mm and 2167mm respectively, while both have the same internal height of 1243mm; no high roof models are available.

The gap between the rear wheel arches is 1229mm, which is enough for a pallet to fit between them. 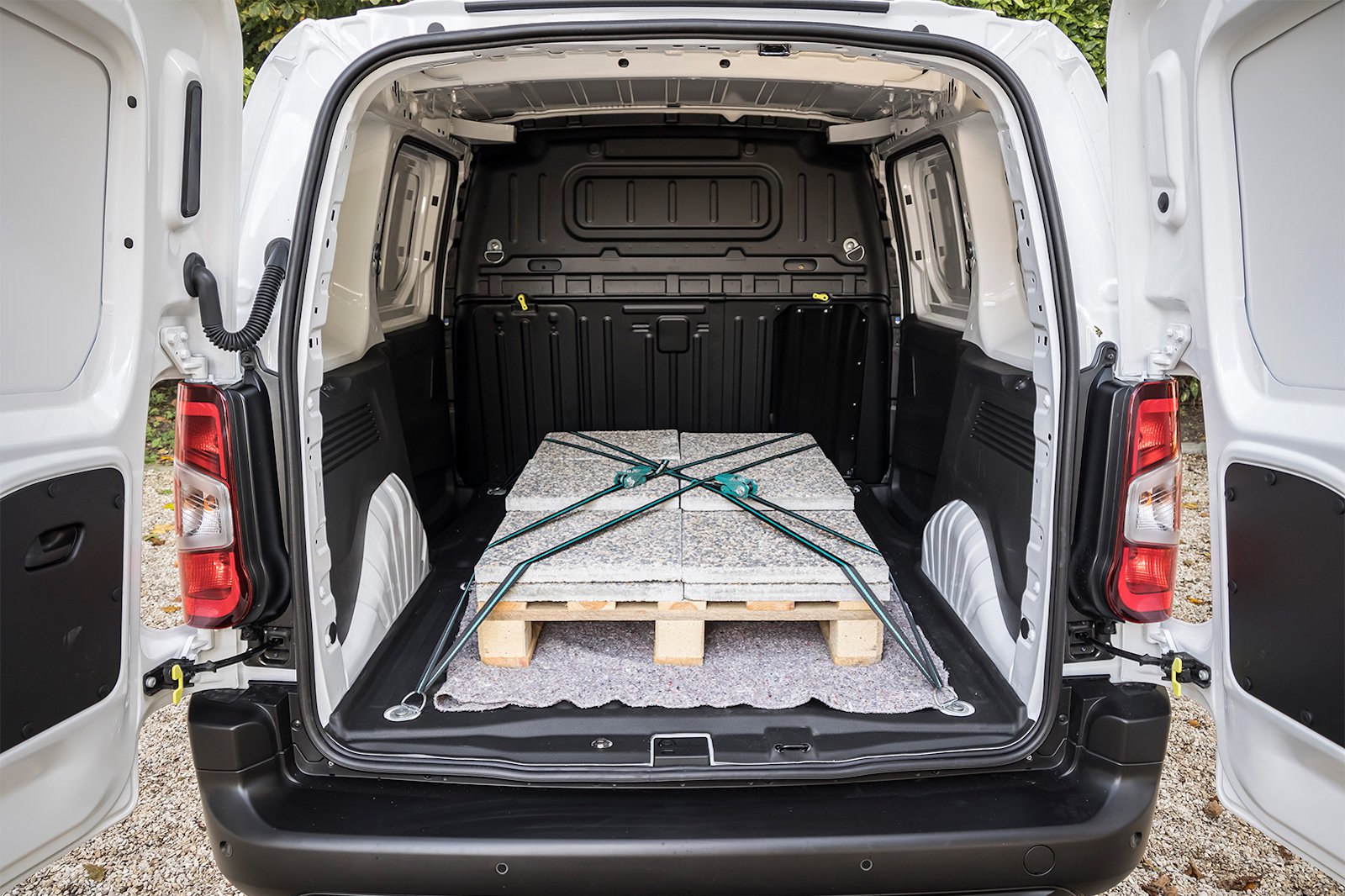 Everyday costs, plus how reliable and safe it is

In common with its close relatives, the Peugeot e-Partner, Toyota Proace City Electric and Vauxhall Combo-e, the Citroën e-Berlingo offers solid value for money. It costs a little more than the Vauxhall, but undercuts the Peugeot – the Toyota costs a fair bit more.

However, you get what you pay for, and the e-Berlingo’s specification suits its position in the hierarchy. The top Driver Pro version includes that Surround Rear Vision system, as well as the Extenso folding passenger seat and air conditioning. Climate control is an optional extra.

The e-Berlingo supports rapid charging speeds of up to 100kWh – fast enough to take the battery from zero to 80% in just 30 minutes. Alternatively, a 7.4kWh wallbox will charge the battery to full in 7.5 hours, and an 11kWh charger will do the same in 5 hours.

The e-Berlingo is supported by a two-year, unlimited-mileage warranty, with the battery covered for eight years or 100,000 miles – whichever comes first. 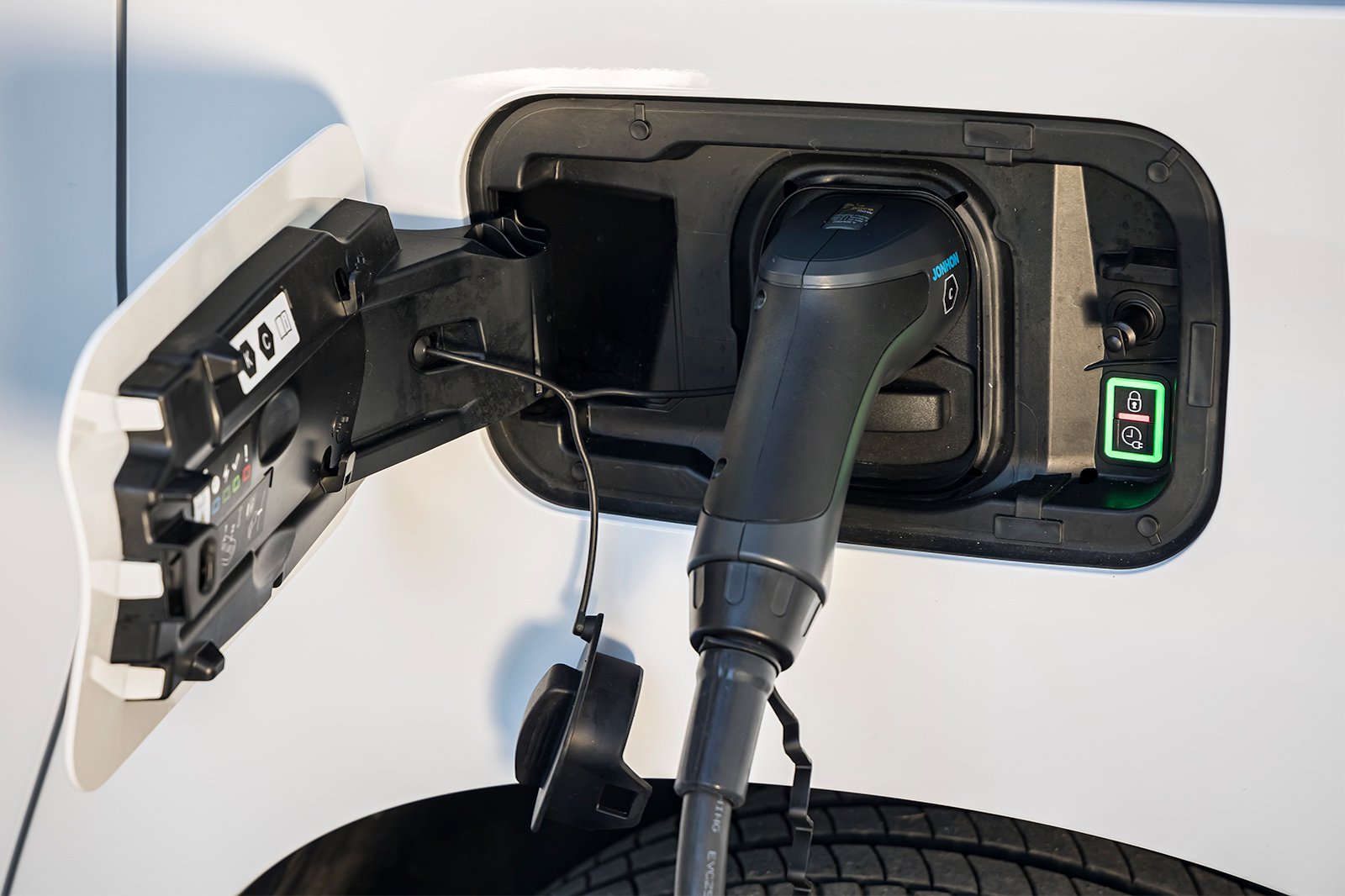